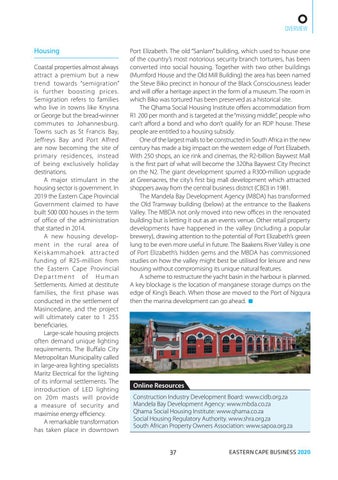 Housing Coastal properties almost always attract a premium but a new trend towards “semigration” is further boosting prices. Semigration refers to families who live in towns like Knysna or George but the bread-winner commutes to Johannesburg. Towns such as St Francis Bay, Jeffreys Bay and Port Alfred are now becoming the site of primary residences, instead of being exclusively holiday destinations. A major stimulant in the housing sector is government. In 2019 the Eastern Cape Provincial Government claimed to have built 500 000 houses in the term of office of the administration that started in 2014. A new housing development in the rural area of Keisk ammahoek attracted funding of R25-million from the Eastern Cape Provincial Department of Human Settlements. Aimed at destitute families, the first phase was conducted in the settlement of Masincedane, and the project will ultimately cater to 1 255 beneficiaries. Large-scale housing projects often demand unique lighting requirements. The Buffalo City Metropolitan Municipality called in large-area lighting specialists Maritz Electrical for the lighting of its informal settlements. The introduction of LED lighting on 20m masts will provide a measure of security and maximise energy efficiency. A remarkable transformation has taken place in downtown

Port Elizabeth. The old “Sanlam” building, which used to house one of the country’s most notorious security branch torturers, has been converted into social housing. Together with two other buildings (Mumford House and the Old Mill Building) the area has been named the Steve Biko precinct in honour of the Black Consciousness leader and will offer a heritage aspect in the form of a museum. The room in which Biko was tortured has been preserved as a historical site. The Qhama Social Housing Institute offers accommodation from R1 200 per month and is targeted at the “missing middle”, people who can’t afford a bond and who don’t qualify for an RDP house. These people are entitled to a housing subsidy. One of the largest malls to be constructed in South Africa in the new century has made a big impact on the western edge of Port Elizabeth. With 250 shops, an ice rink and cinemas, the R2-billion Baywest Mall is the first part of what will become the 320ha Baywest City Precinct on the N2. The giant development spurred a R300-million upgrade at Greenacres, the city’s first big mall development which attracted shoppers away from the central business district (CBD) in 1981. The Mandela Bay Development Agency (MBDA) has transformed the Old Tramway building (below) at the entrance to the Baakens Valley. The MBDA not only moved into new offices in the renovated building but is letting it out as an events venue. Other retail property developments have happened in the valley (including a popular brewery), drawing attention to the potential of Port Elizabeth’s green lung to be even more useful in future. The Baakens River Valley is one of Port Elizabeth’s hidden gems and the MBDA has commissioned studies on how the valley might best be utilised for leisure and new housing without compromising its unique natural features. A scheme to restructure the yacht basin in the harbour is planned. A key blockage is the location of manganese storage dumps on the edge of King’s Beach. When those are moved to the Port of Ngqura then the marina development can go ahead. ■