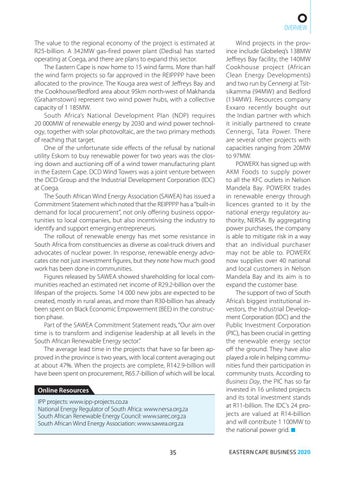 OVERVIEW The value to the regional economy of the project is estimated at R25-billion. A 342MW gas-fired power plant (Dedisa) has started operating at Coega, and there are plans to expand this sector. The Eastern Cape is now home to 15 wind farms. More than half the wind farm projects so far approved in the REIPPPP have been allocated to the province. The Kouga area west of Jeffreys Bay and the Cookhouse/Bedford area about 95km north-west of Makhanda (Grahamstown) represent two wind power hubs, with a collective capacity of 1 185MW. South Africa’s National Development Plan (NDP) requires 20 000MW of renewable energy by 2030 and wind power technology, together with solar photovoltaic, are the two primary methods of reaching that target. One of the unfortunate side effects of the refusal by national utility Eskom to buy renewable power for two years was the closing down and auctioning off of a wind tower manufacturing plant in the Eastern Cape. DCD Wind Towers was a joint venture between the DCD Group and the Industrial Development Corporation (IDC) at Coega. The South African Wind Energy Association (SAWEA) has issued a Commitment Statement which noted that the REIPPPP has a “built-in demand for local procurement”, not only offering business opportunities to local companies, but also incentivising the industry to identify and support emerging entrepreneurs. The rollout of renewable energy has met some resistance in South Africa from constituencies as diverse as coal-truck drivers and advocates of nuclear power. In response, renewable energy advocates cite not just investment figures, but they note how much good work has been done in communities. Figures released by SAWEA showed shareholding for local communities reached an estimated net income of R29.2-billion over the lifespan of the projects. Some 14 000 new jobs are expected to be created, mostly in rural areas, and more than R30-billion has already been spent on Black Economic Empowerment (BEE) in the construction phase. Part of the SAWEA Commitment Statement reads, “Our aim over time is to transform and indigenise leadership at all levels in the South African Renewable Energy sector.” The average lead time in the projects that have so far been approved in the province is two years, with local content averaging out at about 47%. When the projects are complete, R142.9-billion will have been spent on procurement, R65.7-billion of which will be local.

Wind projects in the province include Globeleq’s 138MW Jeffreys Bay facility, the 140MW Cookhouse project (African Clean Energy Developments) and two run by Cennergi at Tsitsikamma (94MW) and Bedford (134MW). Resources company Exxaro recently bought out the Indian partner with which it initially partnered to create Cennergi, Tata Power. There are several other projects with capacities ranging from 20MW to 97MW. POWERX has signed up with AKM Foods to supply power to all the KFC outlets in Nelson Mandela Bay. POWERX trades in renewable energy through licences granted to it by the national energy regulatory authority, NERSA. By aggregating power purchases, the company is able to mitigate risk in a way that an individual purchaser may not be able to. POWERX now supplies over 40 national and local customers in Nelson Mandela Bay and its aim is to expand the customer base. The support of two of South Africa’s biggest institutional investors, the Industrial Development Corporation (IDC) and the Public Investment Corporation (PIC), has been crucial in getting the renewable energy sector off the ground. They have also played a role in helping communities fund their participation in community trusts. According to Business Day, the PIC has so far invested in 16 unlisted projects and its total investment stands at R11-billion. The IDC’s 24 projects are valued at R14-billion and will contribute 1 100MW to the national power grid. ■ EASTERN CAPE BUSINESS 2020