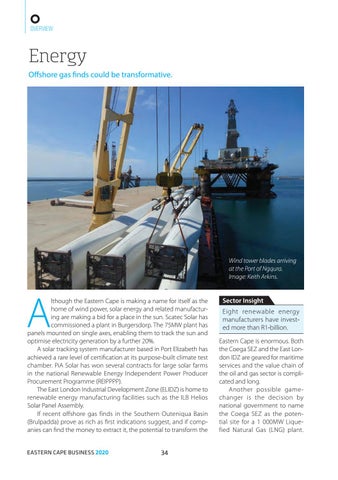 lthough the Eastern Cape is making a name for itself as the home of wind power, solar energy and related manufacturing are making a bid for a place in the sun. Scatec Solar has commissioned a plant in Burgersdorp. The 75MW plant has panels mounted on single axes, enabling them to track the sun and optimise electricity generation by a further 20%. A solar tracking system manufacturer based in Port Elizabeth has achieved a rare level of certification at its purpose-built climate test chamber. PiA Solar has won several contracts for large solar farms in the national Renewable Energy Independent Power Producer Procurement Programme (REIPPPP). The East London Industrial Development Zone (ELIDZ) is home to renewable energy manufacturing facilities such as the ILB Helios Solar Panel Assembly. If recent offshore gas finds in the Southern Outeniqua Basin (Brulpadda) prove as rich as first indications suggest, and if companies can find the money to extract it, the potential to transform the

Sector Insight Eight renewable energy manufacturers have invested more than R1-billion. Eastern Cape is enormous. Both the Coega SEZ and the East London IDZ are geared for maritime services and the value chain of the oil and gas sector is complicated and long. Another possible gamechanger is the decision by national government to name the Coega SEZ as the potential site for a 1 000MW Liquefied Natural Gas (LNG) plant.