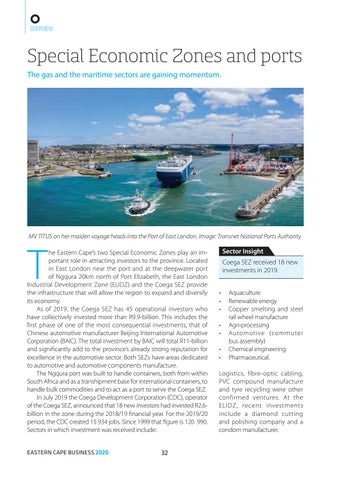 Special Economic Zones and ports The gas and the maritime sectors are gaining momentum.

he Eastern Cape’s two Special Economic Zones play an important role in attracting investors to the province. Located in East London near the port and at the deepwater port of Ngqura 20km north of Port Elizabeth, the East London Industrial Development Zone (ELIDZ) and the Coega SEZ provide the infrastructure that will allow the region to expand and diversify its economy. As of 2019, the Coega SEZ has 45 operational investors who have collectively invested more than R9.9-billion. This includes the first phase of one of the most consequential investments, that of Chinese automotive manufacturer Beijing International Automotive Corporation (BAIC). The total investment by BAIC will total R11-billion and significantly add to the province’s already strong reputation for excellence in the automotive sector. Both SEZs have areas dedicated to automotive and automotive components manufacture. The Ngqura port was built to handle containers, both from within South Africa and as a transhipment base for international containers, to handle bulk commodities and to act as a port to serve the Coega SEZ. In July 2019 the Coega Development Corporation (CDC), operator of the Coega SEZ, announced that 18 new investors had invested R2.6billion in the zone during the 2018/19 financial year. For the 2019/20 period, the CDC created 15 934 jobs. Since 1999 that figure is 120 990. Sectors in which investment was received include: EASTERN CAPE BUSINESS 2020