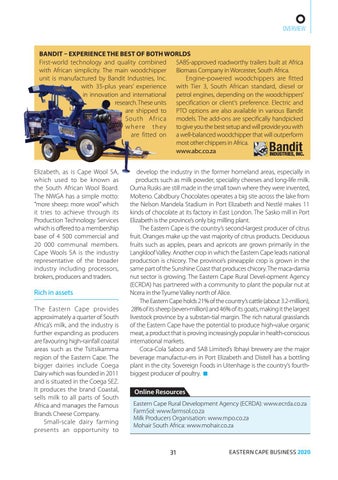 OVERVIEW BANDIT – EXPERIENCE THE BEST OF BOTH WORLDS First-world technology and quality combined SABS-approved roadworthy trailers built at Africa with African simplicity. The main woodchipper Biomass Company in Worcester, South Africa. unit is manufactured by Bandit Industries, Inc. Engine-powered woodchippers are fitted with 35-plus years’ experience with Tier 3, South African standard, diesel or in innovation and international petrol engines, depending on the woodchippers’ research. These units specification or client’s preference. Electric and are shipped to PTO options are also available in various Bandit South Africa models. The add-ons are specifically handpicked w h e r e t h e y to give you the best setup and will provide you with are fitted on a well-balanced woodchipper that will outperform most other chippers in Africa. www.abc.co.za Elizabeth, as is Cape Wool SA, which used to be known as the South African Wool Board. The NWGA has a simple motto: “more sheep: more wool” which it tries to achieve through its Production Technology Services which is offered to a membership base of 4 500 commercial and 20 000 communal members. Cape Wools SA is the industry representative of the broader industry including processors, brokers, producers and traders.

Rich in assets The Eastern Cape provides approximately a quarter of South Africa’s milk, and the industry is further expanding as producers are favouring high-rainfall coastal areas such as the Tsitsikamma region of the Eastern Cape. The bigger dairies include Coega Dairy which was founded in 2011 and is situated in the Coega SEZ. It produces the brand Coastal, sells milk to all parts of South Africa and manages the Famous Brands Cheese Company. Small-scale dairy farming presents an opportunity to

develop the industry in the former homeland areas, especially in products such as milk powder, speciality cheeses and long-life milk. Ouma Rusks are still made in the small town where they were invented, Molteno. Cabdbury Chocolates operates a big site across the lake from the Nelson Mandela Stadium in Port Elizabeth and Nestlé makes 11 kinds of chocolate at its factory in East London. The Sasko mill in Port Elizabeth is the province’s only big milling plant. The Eastern Cape is the country’s second-largest producer of citrus fruit. Oranges make up the vast majority of citrus products. Deciduous fruits such as apples, pears and apricots are grown primarily in the Langkloof Valley. Another crop in which the Eastern Cape leads national production is chicory. The province’s pineapple crop is grown in the same part of the Sunshine Coast that produces chicory. The maca-damia nut sector is growing. The Eastern Cape Rural Devel-opment Agency (ECRDA) has partnered with a community to plant the popular nut at Ncera in the Tyume Valley north of Alice. The Eastern Cape holds 21% of the country’s cattle (about 3.2-million), 28% of its sheep (seven-million) and 46% of its goats, making it the largest livestock province by a substan-tial margin. The rich natural grasslands of the Eastern Cape have the potential to produce high-value organic meat, a product that is proving increasingly popular in health-conscious international markets. Coca-Cola Sabco and SAB Limited’s Ibhayi brewery are the major beverage manufactur-ers in Port Elizabeth and Distell has a bottling plant in the city. Sovereign Foods in Uitenhage is the country’s fourthbiggest producer of poultry. ■