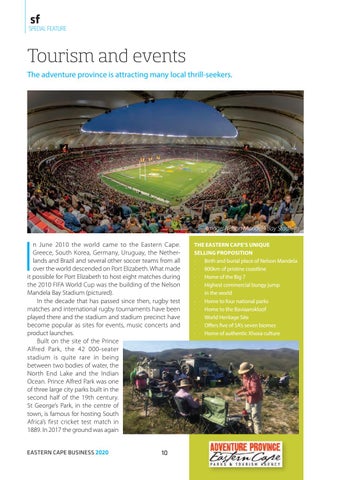 Tourism and events The adventure province is attracting many local thrill-seekers.

n June 2010 the world came to the Eastern Cape. Greece, South Korea, Germany, Uruguay, the Netherlands and Brazil and several other soccer teams from all over the world descended on Port Elizabeth. What made it possible for Port Elizabeth to host eight matches during the 2010 FIFA World Cup was the building of the Nelson Mandela Bay Stadium (pictured). In the decade that has passed since then, rugby test matches and international rugby tournaments have been played there and the stadium and stadium precinct have become popular as sites for events, music concerts and product launches. Built on the site of the Prince Alfred Park, the 42 000-seater stadium is quite rare in being between two bodies of water, the North End Lake and the Indian Ocean. Prince Alfred Park was one of three large city parks built in the second half of the 19th century. St George’s Park, in the centre of town, is famous for hosting South Africa’s first cricket test match in 1889. In 2017 the ground was again