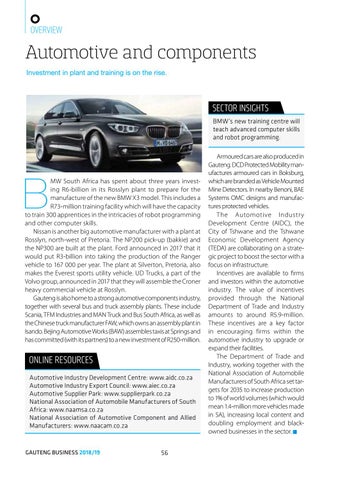 Automotive and components Investment in plant and training is on the rise.

MW South Africa has spent about three years investing R6-billion in its Rosslyn plant to prepare for the manufacture of the new BMW X3 model. This includes a R73-million training facility which will have the capacity to train 300 apprentices in the intricacies of robot programming and other computer skills. Nissan is another big automotive manufacturer with a plant at Rosslyn, north-west of Pretoria. The NP200 pick-up (bakkie) and the NP300 are built at the plant. Ford announced in 2017 that it would put R3-billion into taking the production of the Ranger vehicle to 167 000 per year. The plant at Silverton, Pretoria, also makes the Everest sports utility vehicle. UD Trucks, a part of the Volvo group, announced in 2017 that they will assemble the Croner heavy commercial vehicle at Rosslyn. Gauteng is also home to a strong automotive components industry, together with several bus and truck assembly plants. These include Scania, TFM Industries and MAN Truck and Bus South Africa, as well as the Chinese truck manufacturer FAW, which owns an assembly plant in Isando. Bejing Automotive Works (BAW) assembles taxis at Springs and has committed (with its partners) to a new investment of R250-million.

Armoured cars are also produced in Gauteng. DCD Protected Mobility manufactures armoured cars in Boksburg, which are branded as Vehicle Mounted Mine Detectors. In nearby Benoni, BAE Systems OMC designs and manufactures protected vehicles. The Automotive Industr y Development Centre (AIDC), the City of Tshwane and the Tshwane Economic Development Agency (TEDA) are collaborating on a strategic project to boost the sector with a focus on infrastructure. Incentives are available to firms and investors within the automotive industry. The value of incentives provided through the National Department of Trade and Industry amounts to around R5.9-million. These incentives are a key factor in encouraging firms within the automotive industry to upgrade or expand their facilities. The Department of Trade and Industry, working together with the National Association of Automobile Manufacturers of South Africa set targets for 2035 to increase production to 1% of world volumes (which would mean 1.4-million more vehicles made in SA), increasing local content and doubling employment and blackowned businesses in the sector.