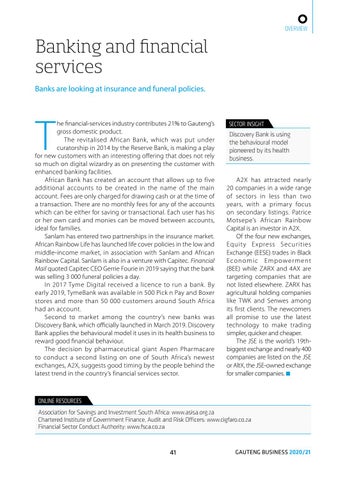 Banking and financial services Banks are looking at insurance and funeral policies.

he financial-services industry contributes 21% to Gauteng’s gross domestic product. The revitalised African Bank, which was put under curatorship in 2014 by the Reserve Bank, is making a play for new customers with an interesting offering that does not rely so much on digital wizardry as on presenting the customer with enhanced banking facilities. African Bank has created an account that allows up to five additional accounts to be created in the name of the main account. Fees are only charged for drawing cash or at the time of a transaction. There are no monthly fees for any of the accounts which can be either for saving or transactional. Each user has his or her own card and monies can be moved between accounts, ideal for families. Sanlam has entered two partnerships in the insurance market. African Rainbow Life has launched life cover policies in the low and middle-income market, in association with Sanlam and African Rainbow Capital. Sanlam is also in a venture with Capitec. Financial Mail quoted Capitec CEO Gerrie Fourie in 2019 saying that the bank was selling 3 000 funeral policies a day. In 2017 Tyme Digital received a licence to run a bank. By early 2019, TymeBank was available in 500 Pick n Pay and Boxer stores and more than 50 000 customers around South Africa had an account. Second to market among the country’s new banks was Discovery Bank, which officially launched in March 2019. Discovery Bank applies the behavioural model it uses in its health business to reward good financial behaviour. The decision by pharmaceutical giant Aspen Pharmacare to conduct a second listing on one of South Africa’s newest exchanges, A2X, suggests good timing by the people behind the latest trend in the country’s financial services sector.

SECTOR INSIGHT Discovery Bank is using the behavioural model pioneered by its health business. A2X has attracted nearly 20 companies in a wide range of sectors in less than two years, with a primary focus on secondary listings. Patrice Motsepe’s African Rainbow Capital is an investor in A2X. Of the four new exchanges, Equity Express Securities Exchange (EESE) trades in Black Ec o n o m i c E m p owe r m e n t (BEE) while ZARX and 4AX are targeting companies that are not listed elsewhere. ZARX has agricultural holding companies like TWK and Senwes among its first clients. The newcomers all promise to use the latest technology to make trading simpler, quicker and cheaper. The JSE is the world’s 19thbiggest exchange and nearly 400 companies are listed on the JSE or AltX, the JSE-owned exchange for smaller companies. ■