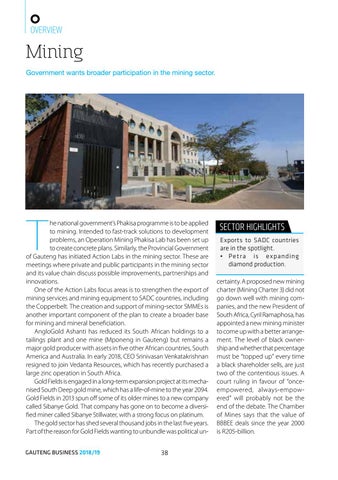 he national government’s Phakisa programme is to be applied to mining. Intended to fast-track solutions to development problems, an Operation Mining Phakisa Lab has been set up to create concrete plans. Similarly, the Provincial Government of Gauteng has initiated Action Labs in the mining sector. These are meetings where private and public participants in the mining sector and its value chain discuss possible improvements, partnerships and innovations. One of the Action Labs focus areas is to strengthen the export of mining services and mining equipment to SADC countries, including the Copperbelt. The creation and support of mining-sector SMMEs is another important component of the plan to create a broader base for mining and mineral beneficiation. AngloGold Ashanti has reduced its South African holdings to a tailings plant and one mine (Mponeng in Gauteng) but remains a major gold producer with assets in five other African countries, South America and Australia. In early 2018, CEO Srinivasan Venkatakrishnan resigned to join Vedanta Resources, which has recently purchased a large zinc operation in South Africa. Gold Fields is engaged in a long-term expansion project at its mechanised South Deep gold mine, which has a life-of-mine to the year 2094. Gold Fields in 2013 spun off some of its older mines to a new company called Sibanye Gold. That company has gone on to become a diversified miner called Sibanye Stillwater, with a strong focus on platinum. The gold sector has shed several thousand jobs in the last five years. Part of the reason for Gold Fields wanting to unbundle was political unGAUTENG BUSINESS 2018/19

SECTOR HIGHLIGHTS Exports to SADC countries are in the spotlight. • P etr a is e xpanding diamond production. certainty. A proposed new mining charter (Mining Charter 3) did not go down well with mining companies, and the new President of South Africa, Cyril Ramaphosa, has appointed a new mining minister to come up with a better arrangement. The level of black ownership and whether that percentage must be “topped up” every time a black shareholder sells, are just two of the contentious issues. A court ruling in favour of “onceempowered, always-empowered” will probably not be the end of the debate. The Chamber of Mines says that the value of BBBEE deals since the year 2000 is R205-billion.