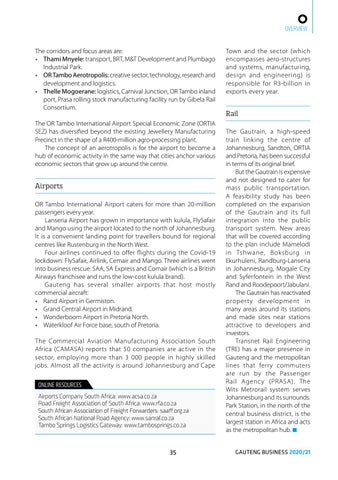 OVERVIEW The corridors and focus areas are: • Thami Mnyele: transport, BRT, M&T Development and Plumbago Industrial Park. • OR Tambo Aerotropolis: creative sector, technology, research and development and logistics. • Thelle Mogoerane: logistics, Carnival Junction, OR Tambo inland port, Prasa rolling stock manufacturing facility run by Gibela Rail Consortium. The OR Tambo International Airport Special Economic Zone (ORTIA SEZ) has diversified beyond the existing Jewellery Manufacturing Precinct in the shape of a R400-million agro-processing plant. The concept of an aerotropolis is for the airport to become a hub of economic activity in the same way that cities anchor various economic sectors that grow up around the centre.

Airports OR Tambo International Airport caters for more than 20-million passengers every year. Lanseria Airport has grown in importance with kulula, FlySafair and Mango using the airport located to the north of Johannesburg. It is a convenient landing point for travellers bound for regional centres like Rustenburg in the North West. Four airlines continued to offer flights during the Covid-19 lockdown: FlySafair, Airlink, Cemair and Mango. Three airlines went into business rescue: SAA, SA Express and Comair (which is a British Airways franchisee and runs the low-cost kulula brand). Gauteng has several smaller airports that host mostly commercial aircraft: • Rand Airport in Germiston. • Grand Central Airport in Midrand. • Wonderboom Airport in Pretoria North. • Waterkloof Air Force base, south of Pretoria. The Commercial Aviation Manufacturing Association South Africa (CAMASA) reports that 50 companies are active in the sector, employing more than 3 000 people in highly skilled jobs. Almost all the activity is around Johannesburg and Cape

Town and the sector (which encompasses aero-structures and systems, manufacturing, design and engineering) is responsible for R3-billion in exports every year.

Rail The Gautrain, a high-speed train linking the centre of Johannesburg, Sandton, ORTIA and Pretoria, has been successful in terms of its original brief. But the Gautrain is expensive and not designed to cater for mass public transportation. A feasibility study has been completed on the expansion of the Gautrain and its full integration into the public transport system. New areas that will be covered according to the plan include Mamelodi in Tshwane, Boksburg in Ekurhuleni, Randburg-Lanseria in Johannesburg, Mogale City and Syferfontein in the West Rand and Roodepoort/Jabulani. The Gautrain has reactivated proper ty development in many areas around its stations and made sites near stations attractive to developers and investors. Transnet Rail Engineering (TRE) has a major presence in Gauteng and the metropolitan lines that ferry commuters are run by the Passenger Rail Agency (PRASA). The Wits Metrorail system serves Johannesburg and its surrounds. Park Station, in the north of the central business district, is the largest station in Africa and acts as the metropolitan hub. ■ GAUTENG BUSINESS 2020/21