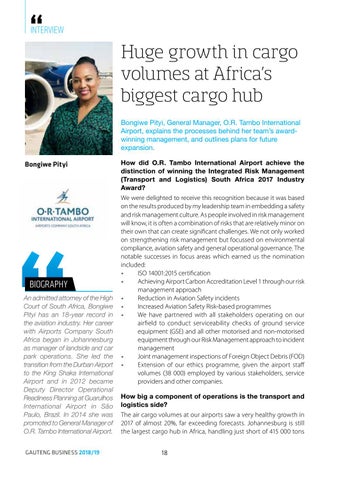 BIOGRAPHY An admitted attorney of the High Court of South Africa, Bongiwe Pityi has an 18-year record in the aviation industry. Her career with Airports Company South Africa began in Johannesburg as manager of landside and car park operations. She led the transition from the Durban Airport to the King Shaka International Airport and in 2012 became Deputy Director Operational Readiness Planning at Guarulhos International Airport in São Paulo, Brazil. In 2014 she was promoted to General Manager of O.R. Tambo International Airport. GAUTENG BUSINESS 2018/19

We were delighted to receive this recognition because it was based on the results produced by my leadership team in embedding a safety and risk management culture. As people involved in risk management will know, it is often a combination of risks that are relatively minor on their own that can create significant challenges. We not only worked on strengthening risk management but focussed on environmental compliance, aviation safety and general operational governance. The notable successes in focus areas which earned us the nomination included: • ISO 14001:2015 certification • Achieving Airport Carbon Accreditation Level 1 through our risk management approach • Reduction in Aviation Safety incidents • Increased Aviation Safety Risk-based programmes • We have partnered with all stakeholders operating on our airfield to conduct serviceability checks of ground service equipment (GSE) and all other motorised and non-motorised equipment through our Risk Management approach to incident management • Joint management inspections of Foreign Object Debris (FOD) • Extension of our ethics programme, given the airport staff volumes (38 000) employed by various stakeholders, service providers and other companies. How big a component of operations is the transport and logistics side?

The air cargo volumes at our airports saw a very healthy growth in 2017 of almost 20%, far exceeding forecasts. Johannesburg is still the largest cargo hub in Africa, handling just short of 415 000 tons