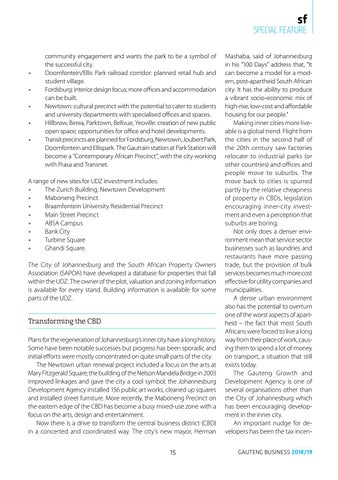 community engagement and wants the park to be a symbol of the successful city. Doornfontein/Ellis Park railroad corridor: planned retail hub and student village. Fordsburg: interior design focus; more offices and accommodation can be built. Newtown: cultural precinct with the potential to cater to students and university departments with specialised offices and spaces. Hillbrow, Berea, Parktown, Bellvue, Yeoville: creation of new public open space; opportunities for office and hotel developments. Transit precincts are planned for Fordsburg, Newtown, Joubert Park, Doornfontein and Ellispark. The Gautrain station at Park Station will become a “Contemporary African Precinct”, with the city working with Prasa and Transnet.

A range of new sites for UDZ investment includes: • The Zurich Building, Newtown Development • Maboneng Precinct • Braamfontein University Residential Precinct • Main Street Precinct • ABSA Campus • Bank City • Turbine Square • Ghandi Square. The City of Johannesburg and the South African Property Owners Association (SAPOA) have developed a database for properties that fall within the UDZ. The owner of the plot, valuation and zoning information is available for every stand. Building information is available for some parts of the UDZ.

Transforming the CBD Plans for the regeneration of Johannesburg’s inner city have a long history. Some have been notable successes but progress has been sporadic and initial efforts were mostly concentrated on quite small parts of the city. The Newtown urban renewal project included a focus on the arts at Mary Fitzgerald Square; the building of the Nelson Mandela Bridge in 2003 improved linkages and gave the city a cool symbol; the Johannesburg Development Agency installed 156 public art works, cleaned up squares and installed street furniture. More recently, the Maboneng Precinct on the eastern edge of the CBD has become a busy mixed-use zone with a focus on the arts, design and entertainment. Now there is a drive to transform the central business district (CBD) in a concerted and coordinated way. The city’s new mayor, Herman

Mashaba, said of Johannesburg in his “100 Days” address that, “It can become a model for a modern, post-apartheid South African city. It has the ability to produce a vibrant socio-economic mix of high-rise, low-cost and affordable housing for our people.” Making inner cities more liveable is a global trend. Flight from the cities in the second half of the 20th century saw factories relocate to industrial parks (or other countries) and offices and people move to suburbs. The move back to cities is spurred partly by the relative cheapness of property in CBDs, legislation encouraging inner-city investment and even a perception that suburbs are boring. Not only does a denser environment mean that service sector businesses such as laundries and restaurants have more passing trade, but the provision of bulk services becomes much more cost effective for utility companies and municipalities. A dense urban environment also has the potential to overturn one of the worst aspects of apartheid – the fact that most South Africans were forced to live a long way from their place of work, causing them to spend a lot of money on transport, a situation that still exists today. The Gauteng Growth and Development Agency is one of several organisations other than the City of Johannesburg which has been encouraging development in the inner city. An important nudge for developers has been the tax incenGAUTENG BUSINESS 2018/19