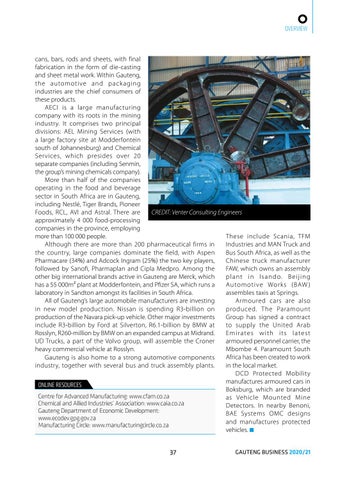 cans, bars, rods and sheets, with final fabrication in the form of die-casting and sheet metal work. Within Gauteng, the automotive and pack aging industries are the chief consumers of these products. AECI is a large manufacturing company with its roots in the mining industry. It comprises two principal divisions: AEL Mining Services (with a large factory site at Modderfontein south of Johannesburg) and Chemical Services, which presides over 20 separate companies (including Senmin, the group’s mining chemicals company). More than half of the companies operating in the food and beverage sector in South Africa are in Gauteng, including Nestlé, Tiger Brands, Pioneer Foods, RCL, AVI and Astral. There are CREDIT: Venter Consulting Engineers approximately 4 000 food-processing companies in the province, employing These include Scania, TFM more than 100 000 people. Industries and MAN Truck and Although there are more than 200 pharmaceutical firms in Bus South Africa, as well as the the country, large companies dominate the field, with Aspen Chinese truck manufacturer Pharmacare (34%) and Adcock Ingram (25%) the two key players, FAW, which owns an assembly followed by Sanofi, Pharmaplan and Cipla Medpro. Among the p l a n t i n I s a n d o. B e i j i n g other big international brands active in Gauteng are Merck, which Automotive Wor ks (BAW ) has a 55 000m² plant at Modderfontein, and Pfizer SA, which runs a assembles taxis at Springs. laboratory in Sandton amongst its facilities in South Africa. Armoured cars are also All of Gauteng’s large automobile manufacturers are investing produced. The Paramount in new model production. Nissan is spending R3-billion on Group has signed a contract production of the Navara pick-up vehicle. Other major investments to supply the United Arab include R3-billion by Ford at Silverton, R6.1-billion by BMW at E m i r a te s w i t h i t s l a te s t Rosslyn, R260-million by BMW on an expanded campus at Midrand. armoured personnel carrier, the UD Trucks, a part of the Volvo group, will assemble the Croner Mbombe 4. Paramount South heavy commercial vehicle at Rosslyn. Africa has been created to work Gauteng is also home to a strong automotive components in the local market. industry, together with several bus and truck assembly plants. DCD Protected Mobility manufactures armoured cars in ONLINE RESOURCES Boksburg, which are branded Centre for Advanced Manufacturing: www.cfam.co.za as Vehicle Mounted Mine Chemical and Allied Industries’ Association: www.caia.co.za Detectors. In nearby Benoni, Gauteng Department of Economic Development: BAE Systems OMC designs www.ecodev.gpg.gov.za and manufactures protected Manufacturing Circle: www.manufacturingcircle.co.za vehicles. ■