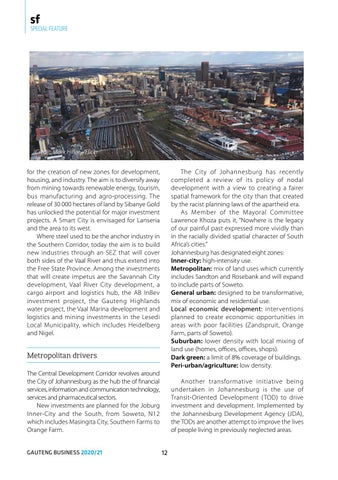 Credit: Mark Hillary/Flickr The City of Johannesburg has recently completed a review of its policy of nodal development with a view to creating a fairer spatial framework for the city than that created by the racist planning laws of the apartheid era. As Member of the Mayoral Committee Lawrence Khoza puts it, “Nowhere is the legacy of our painful past expressed more vividly than in the racially divided spatial character of South Africa’s cities.” Johannesburg has designated eight zones: Inner-city: high-intensity use. Metropolitan: mix of land uses which currently includes Sandton and Rosebank and will expand to include parts of Soweto. General urban: designed to be transformative, mix of economic and residential use. Local economic development: interventions planned to create economic opportunities in areas with poor facilities (Zandspruit, Orange Farm, parts of Soweto). Suburban: lower density with local mixing of land use (homes, offices, offices, shops). Dark green: a limit of 8% coverage of buildings. Peri-urban/agriculture: low density.

for the creation of new zones for development, housing, and industry. The aim is to diversify away from mining towards renewable energy, tourism, bus manufacturing and agro-processing. The release of 30 000 hectares of land by Sibanye Gold has unlocked the potential for major investment projects. A Smart City is envisaged for Lanseria and the area to its west. Where steel used to be the anchor industry in the Southern Corridor, today the aim is to build new industries through an SEZ that will cover both sides of the Vaal River and thus extend into the Free State Province. Among the investments that will create impetus are the Savannah City development, Vaal River City development, a cargo airport and logistics hub, the AB InBev investment project, the Gauteng Highlands water project, the Vaal Marina development and logistics and mining investments in the Lesedi Local Municipality, which includes Heidelberg and Nigel.

Metropolitan drivers The Central Development Corridor revolves around the City of Johannesburg as the hub the of financial services, information and communication technology, services and pharmaceutical sectors. New investments are planned for the Joburg Inner-City and the South, from Soweto, N12 which includes Masingita City, Southern Farms to Orange Farm. GAUTENG BUSINESS 2020/21

Another transformative initiative being undertaken in Johannesburg is the use of Transit-Oriented Development (TOD) to drive investment and development. Implemented by the Johannesburg Development Agency (JDA), the TODs are another attempt to improve the lives of people living in previously neglected areas.