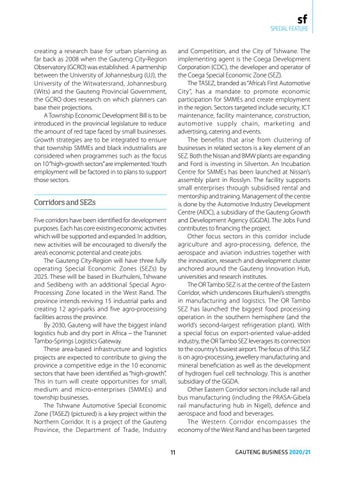 SPECIAL FEATURE and Competition, and the City of Tshwane. The implementing agent is the Coega Development Corporation (CDC), the developer and operator of the Coega Special Economic Zone (SEZ). The TASEZ, branded as “Africa’s First Automotive City”, has a mandate to promote economic participation for SMMEs and create employment in the region. Sectors targeted include security, ICT maintenance, facility maintenance, construction, automotive supply chain, marketing and advertising, catering and events. The benefits that arise from clustering of businesses in related sectors is a key element of an SEZ. Both the Nissan and BMW plants are expanding and Ford is investing in Silverton. An Incubation Centre for SMMEs has been launched at Nissan’s assembly plant in Rosslyn. The facility supports small enterprises through subsidised rental and mentorship and training. Management of the centre is done by the Automotive Industry Development Centre (AIDC), a subsidiary of the Gauteng Growth and Development Agency (GGDA). The Jobs Fund contributes to financing the project. Other focus sectors in this corridor include agriculture and agro-processing, defence, the aerospace and aviation industries together with the innovation, research and development cluster anchored around the Gauteng Innovation Hub, universities and research institutes. The OR Tambo SEZ is at the centre of the Eastern Corridor, which underscores Ekurhuleni’s strengths in manufacturing and logistics. The OR Tambo SEZ has launched the biggest food processing operation in the southern hemisphere (and the world’s second-largest refrigeration plant). With a special focus on export-oriented value-added industry, the OR Tambo SEZ leverages its connection to the country’s busiest airport. The focus of this SEZ is on agro-processing, jewellery manufacturing and mineral beneficiation as well as the development of hydrogen fuel cell technology. This is another subsidiary of the GGDA. Other Eastern Corridor sectors include rail and bus manufacturing (including the PRASA-Gibela rail manufacturing hub in Nigel), defence and aerospace and food and beverages. The Western Corridor encompasses the economy of the West Rand and has been targeted

creating a research base for urban planning as far back as 2008 when the Gauteng City-Region Observatory (GCRO) was established. A partnership between the University of Johannesburg (UJ), the University of the Witwatersrand, Johannesburg (Wits) and the Gauteng Provincial Government, the GCRO does research on which planners can base their projections. A Township Economic Development Bill is to be introduced in the provincial legislature to reduce the amount of red tape faced by small businesses. Growth strategies are to be integrated to ensure that township SMMEs and black industrialists are considered when programmes such as the focus on 10 “high-growth sectors” are implemented. Youth employment will be factored in to plans to support those sectors.

Corridors and SEZs Five corridors have been identified for development purposes. Each has core existing economic activities which will be supported and expanded. In addition, new activities will be encouraged to diversify the area’s economic potential and create jobs. The Gauteng City-Region will have three fully operating Special Economic Zones (SEZs) by 2025. These will be based in Ekurhuleni, Tshwane and Sedibeng with an additional Special AgroProcessing Zone located in the West Rand. The province intends reviving 15 industrial parks and creating 12 agri-parks and five agro-processing facilities across the province. By 2030, Gauteng will have the biggest inland logistics hub and dry port in Africa – the Transnet Tambo-Springs Logistics Gateway. These area-based infrastructure and logistics projects are expected to contribute to giving the province a competitive edge in the 10 economic sectors that have been identified as “high-growth”. This in turn will create opportunities for small, medium and micro-enterprises (SMMEs) and township businesses. The Tshwane Automotive Special Economic Zone (TASEZ) (pictured) is a key project within the Northern Corridor. It is a project of the Gauteng Province, the Department of Trade, Industry