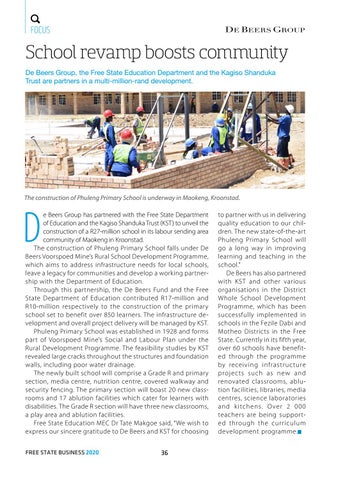 The construction of Phuleng Primary School is underway in Maokeng, Kroonstad.

e Beers Group has partnered with the Free State Department of Education and the Kagiso Shanduka Trust (KST) to unveil the construction of a R27-million school in its labour sending area community of Maokeng in Kroonstad. The construction of Phuleng Primary School falls under De Beers Voorspoed Mine’s Rural School Development Programme, which aims to address infrastructure needs for local schools, leave a legacy for communities and develop a working partnership with the Department of Education. Through this partnership, the De Beers Fund and the Free State Department of Education contributed R17-million and R10-million respectively to the construction of the primary school set to benefit over 850 learners. The infrastructure development and overall project delivery will be managed by KST. Phuleng Primary School was established in 1928 and forms part of Voorspoed Mine’s Social and Labour Plan under the Rural Development Programme. The feasibility studies by KST revealed large cracks throughout the structures and foundation walls, including poor water drainage. The newly built school will comprise a Grade R and primary section, media centre, nutrition centre, covered walkway and security fencing. The primary section will boast 20 new classrooms and 17 ablution facilities which cater for learners with disabilities. The Grade R section will have three new classrooms, a play area and ablution facilities. Free State Education MEC Dr Tate Makgoe said, “We wish to express our sincere gratitude to De Beers and KST for choosing FREE STATE BUSINESS 2020

to partner with us in delivering quality education to our children. The new state-of-the-art Phuleng Primary School will go a long way in improving learning and teaching in the school.” De Beers has also partnered with KST and other various organisations in the District Whole School Development Programme, which has been successfully implemented in schools in the Fezile Dabi and Motheo Districts in the Free State. Currently in its fifth year, over 60 schools have benefited through the programme by receiving infrastruc ture projec ts such as new and renovated classrooms, ablution facilities, libraries, media centres, science laboratories and k itchens. O ver 2 000 teachers are being supported through the curriculum development programme.