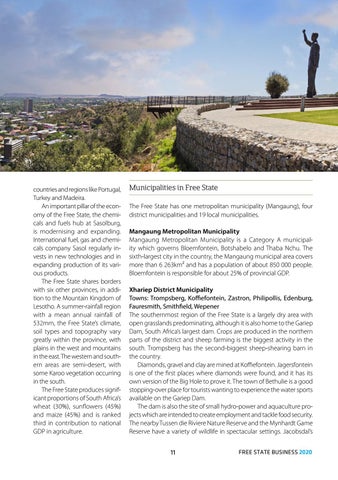 countries and regions like Portugal, Turkey and Madeira. An important pillar of the economy of the Free State, the chemicals and fuels hub at Sasolburg, is modernising and expanding. International fuel, gas and chemicals company Sasol regularly invests in new technologies and in expanding production of its various products. The Free State shares borders with six other provinces, in addition to the Mountain Kingdom of Lesotho. A summer-rainfall region with a mean annual rainfall of 532mm, the Free State’s climate, soil types and topography vary greatly within the province, with plains in the west and mountains in the east. The western and southern areas are semi-desert, with some Karoo vegetation occurring in the south. The Free State produces significant proportions of South Africa’s wheat (30%), sunflowers (45%) and maize (45%) and is ranked third in contribution to national GDP in agriculture.

Municipalities in Free State The Free State has one metropolitan municipality (Mangaung), four district municipalities and 19 local municipalities. Mangaung Metropolitan Municipality Mangaung Metropolitan Municipality is a Category A municipality which governs Bloemfontein, Botshabelo and Thaba Nchu. The sixth-largest city in the country, the Mangaung municipal area covers more than 6 263km² and has a population of about 850 000 people. Bloemfontein is responsible for about 25% of provincial GDP. Xhariep District Municipality Towns: Trompsberg, Koffiefontein, Zastron, Philipollis, Edenburg, Fauresmith, Smithfield, Wepener The southernmost region of the Free State is a largely dry area with open grasslands predominating, although it is also home to the Gariep Dam, South Africa’s largest dam. Crops are produced in the northern parts of the district and sheep farming is the biggest activity in the south. Trompsberg has the second-biggest sheep-shearing barn in the country. Diamonds, gravel and clay are mined at Koffiefontein. Jagersfontein is one of the first places where diamonds were found, and it has its own version of the Big Hole to prove it. The town of Bethulie is a good stopping-over place for tourists wanting to experience the water sports available on the Gariep Dam. The dam is also the site of small hydro-power and aquaculture projects which are intended to create employment and tackle food security. The nearby Tussen die Riviere Nature Reserve and the Mynhardt Game Reserve have a variety of wildlife in spectacular settings. Jacobsdal’s