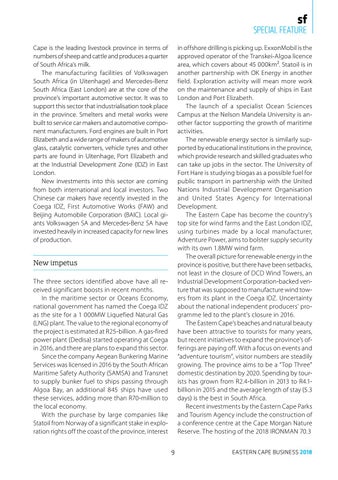 SPECIAL FEATURE in offshore drilling is picking up. ExxonMobil is the approved operator of the Transkei-Algoa licence area, which covers about 45 000km². Statoil is in another partnership with OK Energy in another field. Exploration activity will mean more work on the maintenance and supply of ships in East London and Port Elizabeth. The launch of a specialist Ocean Sciences Campus at the Nelson Mandela University is another factor supporting the growth of maritime activities. The renewable energy sector is similarly supported by educational institutions in the province, which provide research and skilled graduates who can take up jobs in the sector. The University of Fort Hare is studying biogas as a possible fuel for public transport in partnership with the United Nations Industrial Development Organisation and United States Agency for International Development. The Eastern Cape has become the country’s top site for wind farms and the East London IDZ, using turbines made by a local manufacturer, Adventure Power, aims to bolster supply security with its own 1.8MW wind farm. The overall picture for renewable energy in the province is positive, but there have been setbacks, not least in the closure of DCD Wind Towers, an Industrial Development Corporation-backed venture that was supposed to manufacture wind towers from its plant in the Coega IDZ. Uncertainty about the national independent producers’ programme led to the plant’s closure in 2016. The Eastern Cape’s beaches and natural beauty have been attractive to tourists for many years, but recent initiatives to expand the province’s offerings are paying off. With a focus on events and “adventure tourism”, visitor numbers are steadily growing. The province aims to be a “Top Three” domestic destination by 2020. Spending by tourists has grown from R2.4-billion in 2013 to R4.1billion in 2015 and the average length of stay (5.3 days) is the best in South Africa. Recent investments by the Eastern Cape Parks and Tourism Agency include the construction of a conference centre at the Cape Morgan Nature Reserve. The hosting of the 2018 IRONMAN 70.3

Cape is the leading livestock province in terms of numbers of sheep and cattle and produces a quarter of South Africa’s milk. The manufacturing facilities of Volkswagen South Africa (in Uitenhage) and Mercedes-Benz South Africa (East London) are at the core of the province’s important automotive sector. It was to support this sector that industrialisation took place in the province. Smelters and metal works were built to service car makers and automotive component manufacturers. Ford engines are built in Port Elizabeth and a wide range of makers of automotive glass, catalytic converters, vehicle tyres and other parts are found in Uitenhage, Port Elizabeth and at the Industrial Development Zone (IDZ) in East London. New investments into this sector are coming from both international and local investors. Two Chinese car makers have recently invested in the Coega IDZ, First Automotive Works (FAW) and Beijing Automobile Corporation (BAIC). Local giants Volkswagen SA and Mercedes-Benz SA have invested heavily in increased capacity for new lines of production.

New impetus The three sectors identified above have all received significant boosts in recent months. In the maritime sector or Oceans Economy, national government has named the Coega IDZ as the site for a 1 000MW Liquefied Natural Gas (LNG) plant. The value to the regional economy of the project is estimated at R25-billion. A gas-fired power plant (Dedisa) started operating at Coega in 2016, and there are plans to expand this sector. Since the company Aegean Bunkering Marine Services was licensed in 2016 by the South African Maritime Safety Authority (SAMSA) and Transnet to supply bunker fuel to ships passing through Algoa Bay, an additional 845 ships have used these services, adding more than R70-million to the local economy. With the purchase by large companies like Statoil from Norway of a significant stake in exploration rights off the coast of the province, interest