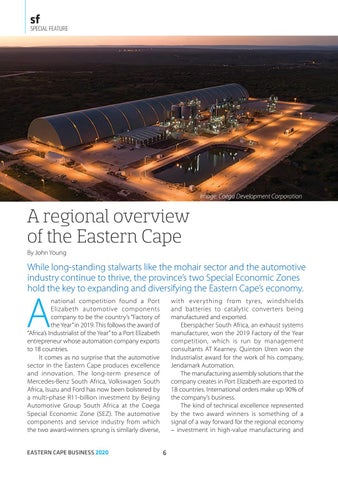 A regional overview of the Eastern Cape By John Young

While long-standing stalwarts like the mohair sector and the automotive industry continue to thrive, the province’s two Special Economic Zones hold the key to expanding and diversifying the Eastern Cape’s economy.

with ever ything from tyres, windshields and batteries to catalytic converters being manufactured and exported. Eberspächer South Africa, an exhaust systems manufacturer, won the 2019 Factory of the Year competition, which is run by management consultants AT Kearney. Quinton Uren won the Industrialist award for the work of his company, Jendamark Automation. The manufacturing assembly solutions that the company creates in Port Elizabeth are exported to 18 countries. International orders make up 90% of the company’s business. The kind of technical excellence represented by the two award winners is something of a signal of a way forward for the regional economy – investment in high-value manufacturing and

national competition found a Port Elizabeth automotive components company to be the country’s “Factory of the Year” in 2019. This follows the award of “Africa’s Industrialist of the Year” to a Port Elizabeth entrepreneur whose automation company exports to 18 countries. It comes as no surprise that the automotive sector in the Eastern Cape produces excellence and innovation. The long-term presence of Mercedes-Benz South Africa, Volkswagen South Africa, Isuzu and Ford has now been bolstered by a multi-phase R11-billion investment by Beijing Automotive Group South Africa at the Coega Special Economic Zone (SEZ). The automotive components and service industry from which the two award-winners sprung is similarly diverse,