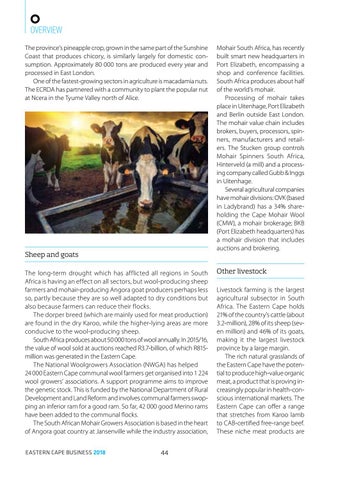 OVERVIEW The province’s pineapple crop, grown in the same part of the Sunshine Coast that produces chicory, is similarly largely for domestic consumption. Approximately 80 000 tons are produced every year and processed in East London. One of the fastest-growing sectors in agriculture is macadamia nuts. The ECRDA has partnered with a community to plant the popular nut at Ncera in the Tyume Valley north of Alice.

Sheep and goats The long-term drought which has afflicted all regions in South Africa is having an effect on all sectors, but wool-producing sheep farmers and mohair-producing Angora goat producers perhaps less so, partly because they are so well adapted to dry conditions but also because farmers can reduce their flocks. The dorper breed (which are mainly used for meat production) are found in the dry Karoo, while the higher-lying areas are more conducive to the wool-producing sheep. South Africa produces about 50 000 tons of wool annually. In 2015/16, the value of wool sold at auctions reached R3.7-billion, of which R815million was generated in the Eastern Cape. The National Woolgrowers Association (NWGA) has helped 24 000 Eastern Cape communal wool farmers get organised into 1 224 wool growers’ associations. A support programme aims to improve the genetic stock. This is funded by the National Department of Rural Development and Land Reform and involves communal farmers swopping an inferior ram for a good ram. So far, 42 000 good Merino rams have been added to the communal flocks. The South African Mohair Growers Association is based in the heart of Angora goat country at Jansenville while the industry association, EASTERN CAPE BUSINESS 2018

Other livestock Livestock farming is the largest agricultural subsector in South Africa. The Eastern Cape holds 21% of the country’s cattle (about 3.2-million), 28% of its sheep (seven million) and 46% of its goats, making it the largest livestock province by a large margin. The rich natural grasslands of the Eastern Cape have the potential to produce high-value organic meat, a product that is proving increasingly popular in health-conscious international markets. The Eastern Cape can offer a range that stretches from Karoo lamb to CAB-certified free-range beef. These niche meat products are