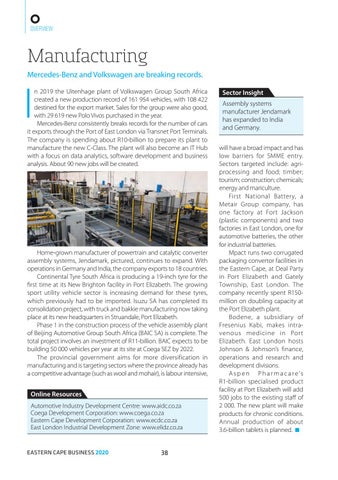 n 2019 the Uitenhage plant of Volkswagen Group South Africa created a new production record of 161 954 vehicles, with 108 422 destined for the export market. Sales for the group were also good, with 29 619 new Polo Vivos purchased in the year. Mercedes-Benz consistently breaks records for the number of cars it exports through the Port of East London via Transnet Port Terminals. The company is spending about R10-billion to prepare its plant to manufacture the new C-Class. The plant will also become an IT Hub with a focus on data analytics, software development and business analysis. About 90 new jobs will be created.

Home-grown manufacturer of powertrain and catalytic converter assembly systems, Jendamark, pictured, continues to expand. With operations in Germany and India, the company exports to 18 countries. Continental Tyre South Africa is producing a 19-inch tyre for the first time at its New Brighton facility in Port Elizabeth. The growing sport utility vehicle sector is increasing demand for these tyres, which previously had to be imported. Isuzu SA has completed its consolidation project, with truck and bakkie manufacturing now taking place at its new headquarters in Struandale, Port Elizabeth. Phase 1 in the construction process of the vehicle assembly plant of Beijing Automotive Group South Africa (BAIC SA) is complete. The total project involves an investment of R11-billion. BAIC expects to be building 50 000 vehicles per year at its site at Coega SEZ by 2022. The provincial government aims for more diversification in manufacturing and is targeting sectors where the province already has a competitive advantage (such as wool and mohair), is labour intensive,