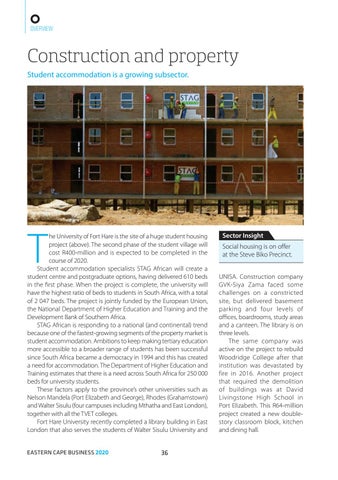 Construction and property Student accommodation is a growing subsector.

he University of Fort Hare is the site of a huge student housing project (above). The second phase of the student village will cost R400-million and is expected to be completed in the course of 2020. Student accommodation specialists STAG African will create a student centre and postgraduate options, having delivered 610 beds in the first phase. When the project is complete, the university will have the highest ratio of beds to students in South Africa, with a total of 2 047 beds. The project is jointly funded by the European Union, the National Department of Higher Education and Training and the Development Bank of Southern Africa. STAG African is responding to a national (and continental) trend because one of the fastest-growing segments of the property market is student accommodation. Ambitions to keep making tertiary education more accessible to a broader range of students has been successful since South Africa became a democracy in 1994 and this has created a need for accommodation. The Department of Higher Education and Training estimates that there is a need across South Africa for 250 000 beds for university students. These factors apply to the provinceâ&#x20AC;&#x2122;s other universities such as Nelson Mandela (Port Elizabeth and George), Rhodes (Grahamstown) and Walter Sisulu (four campuses including Mthatha and East London), together with all the TVET colleges. Fort Hare University recently completed a library building in East London that also serves the students of Walter Sisulu University and EASTERN CAPE BUSINESS 2020

Sector Insight Social housing is on offer at the Steve Biko Precinct. UNISA. Construction company GVK-Siya Zama faced some challenges on a constricted site, but delivered basement parking and four levels of offices, boardrooms, study areas and a canteen. The library is on three levels. The same company was active on the project to rebuild Woodridge College after that institution was devastated by fire in 2016. Another project that required the demolition of buildings was at David Livingstone High School in Port Elizabeth. This R64-million project created a new doublestory classroom block, kitchen and dining hall.