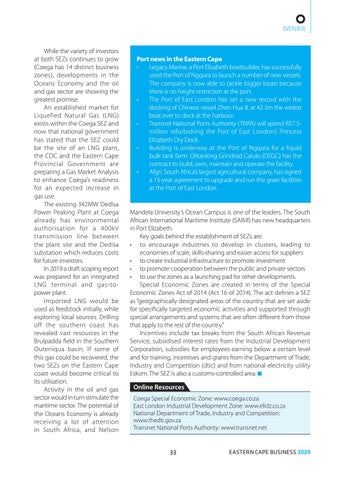 OVERVIEW While the variety of investors at both SEZs continues to grow (Coega has 14 distinct business zones), developments in the Oceans Economy and the oil and gas sector are showing the greatest promise. An established market for Liquefied Natural Gas (LNG) exists within the Coega SEZ and now that national government has stated that the SEZ could be the site of an LNG plant, the CDC and the Eastern Cape Provincial Government are preparing a Gas Market Analysis to enhance Coega’s readiness for an expected increase in gas use. The existing 342MW Dedisa Power Peaking Plant at Coega already has environmental authorisation for a 400kV transmission line between the plant site and the Dedisa substation which reduces costs for future investors. In 2019 a draft scoping report was prepared for an integrated LNG terminal and gas-topower plant. Imported LNG would be used as feedstock initially, while exploring local sources. Drilling off the southern coast has revealed vast resources in the Brulpadda field in the Southern Outeniqua basin. If some of this gas could be recovered, the two SEZs on the Eastern Cape coast would become critical to its utilisation. Activity in the oil and gas sector would in turn stimulate the maritime sector. The potential of the Oceans Economy is already receiving a lot of attention in South Africa, and Nelson

Port news in the Eastern Cape • L egacy Marine, a Port Elizabeth boatbuilder, has successfully used the Port of Ngqura to launch a number of new vessels. The company is now able to tackle bigger boats because there is no height restriction at the port. • The Port of East London has set a new record with the docking of Chinese vessel Zhen Hua 8, at 42.3m the widest boat ever to dock at the harbour. • Transnet National Ports Authority (TNPA) will spend R57.5million refurbishing the Port of East London’s Princess Elizabeth Dry Dock. • Building is underway at the Port of Ngqura for a liquid bulk tank farm. Oiltanking Grindrod Calulo (OTGC) has the contract to build, own, maintain and operate the facility. • A  fgri, South Africa’s largest agricultural company, has signed a 15-year agreement to upgrade and run the grain facilities at the Port of East London. Mandela University’s Ocean Campus is one of the leaders. The South African International Maritime Institute (SAIMI) has new headquarters in Port Elizabeth. Key goals behind the establishment of SEZs are: • to encourage industries to develop in clusters, leading to economies of scale, skills-sharing and easier access for suppliers • to create industrial infrastructure to promote investment • to promote cooperation between the public and private sectors • to use the zones as a launching pad for other developments. Special Economic Zones are created in terms of the Special Economic Zones Act of 2014 (Act 16 of 2014). The act defines a SEZ as “geographically designated areas of the country that are set aside for specifically targeted economic activities and supported through special arrangements and systems that are often different from those that apply to the rest of the country.” Incentives include tax breaks from the South African Revenue Service, subsidised interest rates from the Industrial Development Corporation, subsidies for employees earning below a certain level and for training, incentives and grants from the Department of Trade, Industry and Competition (dtic) and from national electricity utility Eskom. The SEZ is also a customs-controlled area. ■