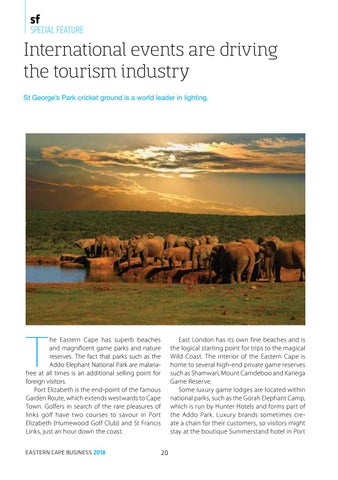 he Eastern Cape has superb beaches and magnificent game parks and nature reserves. The fact that parks such as the Addo Elephant National Park are malariafree at all times is an additional selling point for foreign visitors. Port Elizabeth is the end-point of the famous Garden Route, which extends westwards to Cape Town. Golfers in search of the rare pleasures of links golf have two courses to savour in Port Elizabeth (Humewood Golf Club) and St Francis Links, just an hour down the coast. EASTERN CAPE BUSINESS 2018

East London has its own fine beaches and is the logical starting point for trips to the magical Wild Coast. The interior of the Eastern Cape is home to several high-end private game reserves such as Shamwari, Mount Camdeboo and Kariega Game Reserve. Some luxury game lodges are located within national parks, such as the Gorah Elephant Camp, which is run by Hunter Hotels and forms part of the Addo Park. Luxury brands sometimes create a chain for their customers, so visitors might stay at the boutique Summerstand hotel in Port