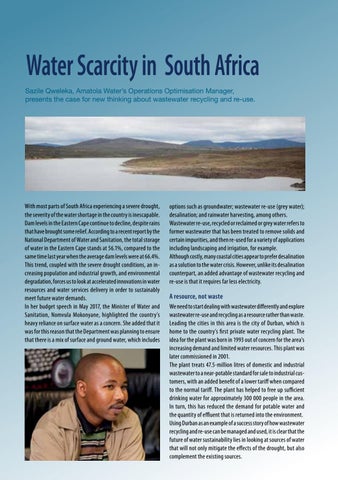 With most parts of South Africa experiencing a severe drought, the severity of the water shortage in the country is inescapable. Dam levels in the Eastern Cape continue to decline, despite rains that have brought some relief. According to a recent report by the National Department of Water and Sanitation, the total storage of water in the Eastern Cape stands at 56.1%, compared to the same time last year when the average dam levels were at 66.4%. This trend, coupled with the severe drought conditions, an increasing population and industrial growth, and environmental degradation, forces us to look at accelerated innovations in water resources and water services delivery in order to sustainably meet future water demands. In her budget speech in May 2017, the Minister of Water and Sanitation, Nomvula Mokonyane, highlighted the country’s heavy reliance on surface water as a concern. She added that it was for this reason that the Department was planning to ensure that there is a mix of surface and ground water, which includes

options such as groundwater; wastewater re-use (grey water); desalination; and rainwater harvesting, among others. Wastewater re-use, recycled or reclaimed or grey water refers to former wastewater that has been treated to remove solids and certain impurities, and then re-used for a variety of applications including landscaping and irrigation, for example. Although costly, many coastal cities appear to prefer desalination as a solution to the water crisis. However, unlike its desalination counterpart, an added advantage of wastewater recycling and re-use is that it requires far less electricity.

A resource, not waste We need to start dealing with wastewater differently and explore wastewater re-use and recycling as a resource rather than waste. Leading the cities in this area is the city of Durban, which is home to the country’s first private water recycling plant. The idea for the plant was born in 1993 out of concern for the area’s increasing demand and limited water resources. This plant was later commissioned in 2001. The plant treats 47.5-million litres of domestic and industrial wastewater to a near-potable standard for sale to industrial customers, with an added benefit of a lower tariff when compared to the normal tariff. The plant has helped to free up sufficient drinking water for approximately 300 000 people in the area. In turn, this has reduced the demand for potable water and the quantity of effluent that is returned into the environment. Using Durban as an example of a success story of how wastewater recycling and re-use can be managed and used, it is clear that the future of water sustainability lies in looking at sources of water that will not only mitigate the effects of the drought, but also complement the existing sources.