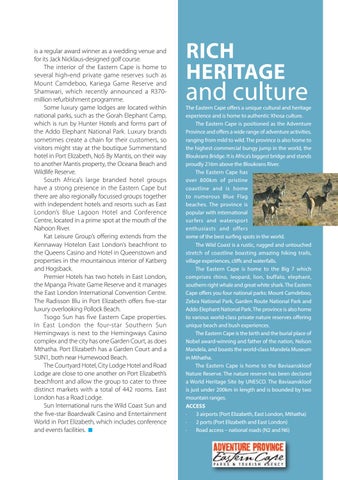 is a regular award winner as a wedding venue and for its Jack Nicklaus-designed golf course. The interior of the Eastern Cape is home to several high-end private game reserves such as Mount Camdeboo, Kariega Game Reserve and Shamwari, which recently announced a R370million refurbishment programme. Some luxury game lodges are located within national parks, such as the Gorah Elephant Camp, which is run by Hunter Hotels and forms part of the Addo Elephant National Park. Luxury brands sometimes create a chain for their customers, so visitors might stay at the boutique Summerstand hotel in Port Elizabeth, No5 By Mantis, on their way to another Mantis property, the Oceana Beach and Wildlife Reserve. South Africa’s large branded hotel groups have a strong presence in the Eastern Cape but there are also regionally focussed groups together with independent hotels and resorts such as East London’s Blue Lagoon Hotel and Conference Centre, located in a prime spot at the mouth of the Nahoon River. Kat Leisure Group’s offering extends from the Kennaway Hotelon East London’s beachfront to the Queens Casino and Hotel in Queenstown and properties in the mountainous interior of Katberg and Hogsback. Premier Hotels has two hotels in East London, the Mpanga Private Game Reserve and it manages the East London International Convention Centre. The Radisson Blu in Port Elizabeth offers five-star luxury overlooking Pollock Beach. Tsogo Sun has five Eastern Cape properties. In East London the four-star Southern Sun Hemingways is next to the Hemingways Casino complex and the city has one Garden Court, as does Mthatha. Port Elizabeth has a Garden Court and a SUN1, both near Humewood Beach. The Courtyard Hotel, City Lodge Hotel and Road Lodge are close to one another on Port Elizabeth’s beachfront and allow the group to cater to three distinct markets with a total of 442 rooms. East London has a Road Lodge. Sun International runs the Wild Coast Sun and the five-star Boardwalk Casino and Entertainment World in Port Elizabeth, which includes conference and events facilities. ■

The Eastern Cape offers a unique cultural and heritage experience and is home to authentic Xhosa culture. The Eastern Cape is positioned as the Adventure Province and offers a wide range of adventure activities, ranging from mild to wild. The province is also home to the highest commercial bungy jump in the world, the Bloukrans Bridge. It is Africa’s biggest bridge and stands proudly 216m above the Bloukrans River. The Eastern Cape has over 800km of pristine coastline and is home to numerous Blue Flag beaches. The province is popular with international surfers and watersport enthusiasts and offers some of the best surfing spots in the world. The Wild Coast is a rustic, rugged and untouched stretch of coastline boasting amazing hiking trails, village experiences, cliffs and waterfalls. The Eastern Cape is home to the Big 7 which comprises rhino, leopard, lion, buffalo, elephant, southern right whale and great white shark. The Eastern Cape offers you four national parks: Mount Camdeboo, Zebra National Park, Garden Route National Park and Addo Elephant National Park. The province is also home to various world-class private nature reserves offering unique beach and bush experiences. The Eastern Cape is the birth and the burial place of Nobel award-winning and father of the nation, Nelson Mandela, and boasts the world-class Mandela Museum in Mthatha. The Eastern Cape is home to the Baviaanskloof Nature Reserve. The nature reserve has been declared a World Heritage Site by UNESCO. The Baviaanskloof is just under 200km in length and is bounded by two mountain ranges. ACCESS · 3 airports (Port Elizabeth, East London, Mthatha) · 2 ports (Port Elizabeth and East London) · Road access – national roads (N2 and N6)