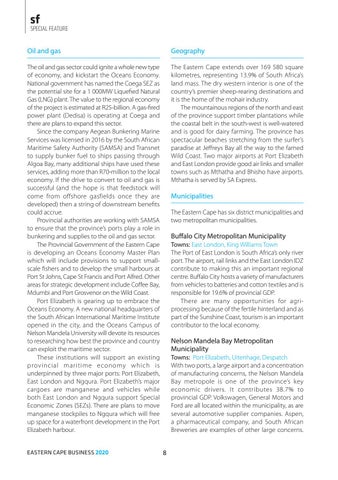 The oil and gas sector could ignite a whole new type of economy, and kickstart the Oceans Economy. National government has named the Coega SEZ as the potential site for a 1 000MW Liquefied Natural Gas (LNG) plant. The value to the regional economy of the project is estimated at R25-billion. A gas-fired power plant (Dedisa) is operating at Coega and there are plans to expand this sector. Since the company Aegean Bunkering Marine Services was licensed in 2016 by the South African Maritime Safety Authority (SAMSA) and Transnet to supply bunker fuel to ships passing through Algoa Bay, many additional ships have used these services, adding more than R70-million to the local economy. If the drive to convert to oil and gas is successful (and the hope is that feedstock will come from offshore gasfields once they are developed) then a string of downstream benefits could accrue. Provincial authorities are working with SAMSA to ensure that the province’s ports play a role in bunkering and supplies to the oil and gas sector. The Provincial Government of the Eastern Cape is developing an Oceans Economy Master Plan which will include provisions to support smallscale fishers and to develop the small harbours at Port St Johns, Cape St Francis and Port Alfred. Other areas for strategic development include Coffee Bay, Mdumbi and Port Grosvenor on the Wild Coast. Port Elizabeth is gearing up to embrace the Oceans Economy. A new national headquarters of the South African International Maritime Institute opened in the city, and the Oceans Campus of Nelson Mandela University will devote its resources to researching how best the province and country can exploit the maritime sector. These institutions will support an existing provincial maritime economy which is underpinned by three major ports: Port Elizabeth, East London and Ngqura. Port Elizabeth’s major cargoes are manganese and vehicles while both East London and Ngqura support Special Economic Zones (SEZs). There are plans to move manganese stockpiles to Ngqura which will free up space for a waterfront development in the Port Elizabeth harbour.

The Eastern Cape extends over 169 580 square kilometres, representing 13.9% of South Africa’s land mass. The dry western interior is one of the country’s premier sheep-rearing destinations and it is the home of the mohair industry. The mountainous regions of the north and east of the province support timber plantations while the coastal belt in the south-west is well-watered and is good for dairy farming. The province has spectacular beaches stretching from the surfer’s paradise at Jeffreys Bay all the way to the famed Wild Coast. Two major airports at Port Elizabeth and East London provide good air links and smaller towns such as Mthatha and Bhisho have airports. Mthatha is served by SA Express.

Towns: East London, King Williams Town The Port of East London is South Africa’s only river port. The airport, rail links and the East London IDZ contribute to making this an important regional centre. Buffalo City hosts a variety of manufacturers from vehicles to batteries and cotton textiles and is responsible for 19.6% of provincial GDP. There are many opportunities for agriprocessing because of the fertile hinterland and as part of the Sunshine Coast, tourism is an important contributor to the local economy.

Towns: Port Elizabeth, Uitenhage, Despatch With two ports, a large airport and a concentration of manufacturing concerns, the Nelson Mandela Bay metropole is one of the province’s key economic drivers. It contributes 38.7% to provincial GDP. Volkswagen, General Motors and Ford are all located within the municipality, as are several automotive supplier companies. Aspen, a pharmaceutical company, and South African Breweries are examples of other large concerns.