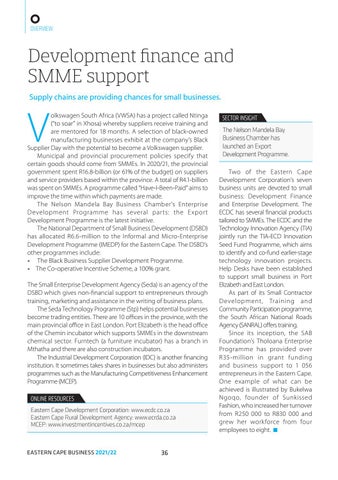 olkswagen South Africa (VWSA) has a project called Ntinga (“to soar” in Xhosa) whereby suppliers receive training and are mentored for 18 months. A selection of black-owned manufacturing businesses exhibit at the company’s Black Supplier Day with the potential to become a Volkswagen supplier. Municipal and provincial procurement policies specify that certain goods should come from SMMEs. In 2020/21, the provincial government spent R16.8-billion (or 61% of the budget) on suppliers and service providers based within the province. A total of R4.1-billion was spent on SMMEs. A programme called “Have-I-Been-Paid” aims to improve the time within which payments are made. The Nelson Mandela Bay Business Chamber’s Enterprise Development Programme has several par ts: the Expor t Development Programme is the latest initiative. The National Department of Small Business Development (DSBD) has allocated R6.6-million to the Informal and Micro-Enterprise Development Programme (IMEDP) for the Eastern Cape. The DSBD’s other programmes include: • The Black Business Supplier Development Programme. • The Co-operative Incentive Scheme, a 100% grant. The Small Enterprise Development Agency (Seda) is an agency of the DSBD which gives non-financial support to entrepreneurs through training, marketing and assistance in the writing of business plans. The Seda Technology Programme (Stp) helps potential businesses become trading entities. There are 10 offices in the province, with the main provincial office in East London. Port Elizabeth is the head office of the Chemin incubator which supports SMMEs in the downstream chemical sector. Furntech (a furniture incubator) has a branch in Mthatha and there are also construction incubators. The Industrial Development Corporation (IDC) is another financing institution. It sometimes takes shares in businesses but also administers programmes such as the Manufacturing Competitiveness Enhancement Programme (MCEP).

SECTOR INSIGHT The Nelson Mandela Bay Business Chamber has launched an Export Development Programme. Two of the Eastern Cape Development Corporation’s seven business units are devoted to small business: Development Finance and Enterprise Development. The ECDC has several financial products tailored to SMMEs. The ECDC and the Technology Innovation Agency (TIA) jointly run the TIA-ECD Innovation Seed Fund Programme, which aims to identify and co-fund earlier-stage technology innovation projects. Help Desks have been established to support small business in Port Elizabeth and East London. As part of its Small Contractor Development, Training and Community Participation programme, the South African National Roads Agency (SANRAL) offers training. Since its inception, the SAB Foundation’s Tholoana Enterprise Programme has provided over R35-million in grant funding and business support to 1 056 entrepreneurs in the Eastern Cape. One example of what can be achieved is illustrated by Bukelwa Ngoqo, founder of Sunkissed Fashion, who increased her turnover from R250 000 to R830 000 and grew her workforce from four employees to eight. ■