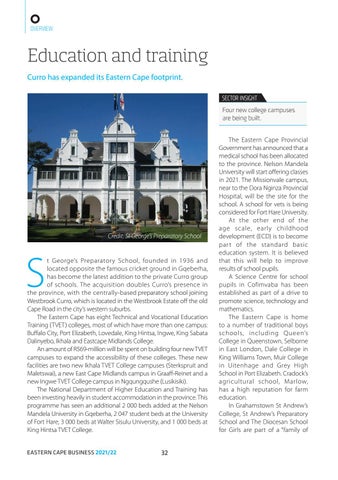 t George’s Preparatory School, founded in 1936 and located opposite the famous cricket ground in Gqeberha, has become the latest addition to the private Curro group of schools. The acquisition doubles Curro’s presence in the province, with the centrally-based preparatory school joining Westbrook Curro, which is located in the Westbrook Estate off the old Cape Road in the city’s western suburbs. The Eastern Cape has eight Technical and Vocational Education Training (TVET) colleges, most of which have more than one campus: Buffalo City, Port Elizabeth, Lovedale, King Hintsa, Ingwe, King Sabata Dalinyebo, Ikhala and Eastcape Midlands College. An amount of R569-million will be spent on building four new TVET campuses to expand the accessibility of these colleges. These new facilities are two new Ikhala TVET College campuses (Sterkspruit and Maletswai), a new East Cape Midlands campus in Graaff-Reinet and a new Ingwe TVET College campus in Ngqungqushe (Lusikisiki). The National Department of Higher Education and Training has been investing heavily in student accommodation in the province. This programme has seen an additional 2 000 beds added at the Nelson Mandela University in Gqeberha, 2 047 student beds at the University of Fort Hare, 3 000 beds at Walter Sisulu University, and 1 000 beds at King Hintsa TVET College.

The Eastern Cape Provincial Government has announced that a medical school has been allocated to the province. Nelson Mandela University will start offering classes in 2021. The Missionvale campus, near to the Dora Nginza Provincial Hospital, will be the site for the school. A school for vets is being considered for Fort Hare University. At the other end of the age scale, early childhood development (ECD) is to become part of the standard basic education system. It is believed that this will help to improve results of school pupils. A Science Centre for school pupils in Cofimvaba has been established as part of a drive to promote science, technology and mathematics. The Eastern Cape is home to a number of traditional boys schools, including Queen’s College in Queenstown, Selborne in East London, Dale College in King Williams Town, Muir College in Uitenhage and Grey High School in Port Elizabeth. Cradock’s agricultural school, Marlow, has a high reputation for farm education. In Grahamstown St Andrew’s College, St Andrew’s Preparatory School and The Diocesan School for Girls are part of a “family of