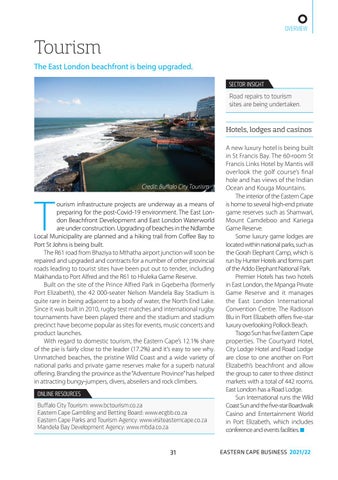 Tourism The East London beachfront is being upgraded. SECTOR INSIGHT Road repairs to tourism sites are being undertaken.

ourism infrastructure projects are underway as a means of preparing for the post-Covid-19 environment. The East London Beachfront Development and East London Waterworld are under construction. Upgrading of beaches in the Ndlambe Local Municipality are planned and a hiking trail from Coffee Bay to Port St Johns is being built. The R61 road from Bhaziya to Mthatha airport junction will soon be repaired and upgraded and contracts for a number of other provincial roads leading to tourist sites have been put out to tender, including Makhanda to Port Alfred and the R61 to Hluleka Game Reserve. Built on the site of the Prince Alfred Park in Gqeberha (formerly Port Elizabeth), the 42 000-seater Nelson Mandela Bay Stadium is quite rare in being adjacent to a body of water, the North End Lake. Since it was built in 2010, rugby test matches and international rugby tournaments have been played there and the stadium and stadium precinct have become popular as sites for events, music concerts and product launches. With regard to domestic tourism, the Eastern Cape’s 12.1% share of the pie is fairly close to the leader (17.2%) and it’s easy to see why. Unmatched beaches, the pristine Wild Coast and a wide variety of national parks and private game reserves make for a superb natural offering. Branding the province as the “Adventure Province” has helped in attracting bungy-jumpers, divers, abseilers and rock climbers.

A new luxury hotel is being built in St Francis Bay. The 60-room St Francis Links Hotel by Mantis will overlook the golf course’s final hole and has views of the Indian Ocean and Kouga Mountains. The interior of the Eastern Cape is home to several high-end private game reserves such as Shamwari, Mount Camdeboo and Kariega Game Reserve. Some luxury game lodges are located within national parks, such as the Gorah Elephant Camp, which is run by Hunter Hotels and forms part of the Addo Elephant National Park. Premier Hotels has two hotels in East London, the Mpanga Private Game Reserve and it manages the East London International Convention Centre. The Radisson Blu in Port Elizabeth offers five-star luxury overlooking Pollock Beach. Tsogo Sun has five Eastern Cape properties. The Courtyard Hotel, City Lodge Hotel and Road Lodge are close to one another on Port Elizabeth’s beachfront and allow the group to cater to three distinct markets with a total of 442 rooms. East London has a Road Lodge. Sun International runs the Wild Coast Sun and the five-star Boardwalk Casino and Entertainment World in Port Elizabeth, which includes conference and events facilities. ■ EASTERN CAPE BUSINESS 2021/22