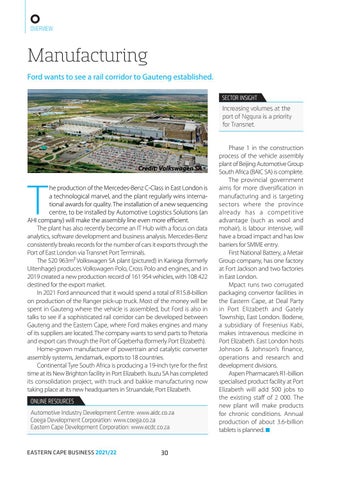 Manufacturing Ford wants to see a rail corridor to Gauteng established. SECTOR INSIGHT Increasing volumes at the port of Ngqura is a priority for Transnet.

he production of the Mercedes-Benz C-Class in East London is a technological marvel, and the plant regularly wins international awards for quality. The installation of a new sequencing centre, to be installed by Automotive Logistics Solutions (an AHI company) will make the assembly line even more efficient. The plant has also recently become an IT Hub with a focus on data analytics, software development and business analysis. Mercedes-Benz consistently breaks records for the number of cars it exports through the Port of East London via Transnet Port Terminals. The 520 963m² Volkswagen SA plant (pictured) in Kariega (formerly Uitenhage) produces Volkswagen Polo, Cross Polo and engines, and in 2019 created a new production record of 161 954 vehicles, with 108 422 destined for the export market. In 2021 Ford announced that it would spend a total of R15.8-billion on production of the Ranger pick-up truck. Most of the money will be spent in Gauteng where the vehicle is assembled, but Ford is also in talks to see if a sophisticated rail corridor can be developed between Gauteng and the Eastern Cape, where Ford makes engines and many of its suppliers are located. The company wants to send parts to Pretoria and export cars through the Port of Gqeberha (formerly Port Elizabeth). Home-grown manufacturer of powertrain and catalytic converter assembly systems, Jendamark, exports to 18 countries. Continental Tyre South Africa is producing a 19-inch tyre for the first time at its New Brighton facility in Port Elizabeth. Isuzu SA has completed its consolidation project, with truck and bakkie manufacturing now taking place at its new headquarters in Struandale, Port Elizabeth.

Phase 1 in the construction process of the vehicle assembly plant of Beijing Automotive Group South Africa (BAIC SA) is complete. The provincial government aims for more diversification in manufacturing and is targeting sectors where the province already has a competitive advantage (such as wool and mohair), is labour intensive, will have a broad impact and has low barriers for SMME entry. First National Battery, a Metair Group company, has one factory at Fort Jackson and two factories in East London. Mpact runs two corrugated packaging convertor facilities in the Eastern Cape, at Deal Party in Port Elizabeth and Gately Township, East London. Bodene, a subsidiary of Fresenius Kabi, makes intravenous medicine in Port Elizabeth. East London hosts Johnson &amp; Johnson’s finance, operations and research and development divisions. Aspen Pharmacare’s R1-billion specialised product facility at Port Elizabeth will add 500 jobs to the existing staff of 2 000. The new plant will make products for chronic conditions. Annual production of about 3.6-billion tablets is planned. ■