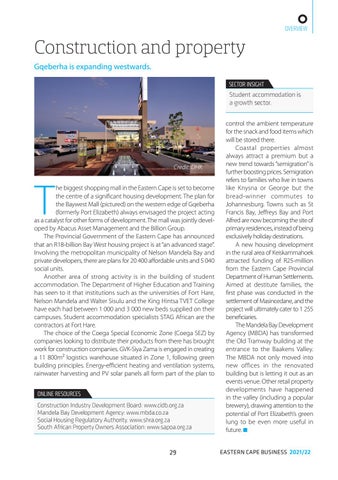 he biggest shopping mall in the Eastern Cape is set to become the centre of a significant housing development. The plan for the Baywest Mall (pictured) on the western edge of Gqeberha (formerly Port Elizabeth) always envisaged the project acting as a catalyst for other forms of development. The mall was jointly developed by Abacus Asset Management and the Billion Group. The Provincial Government of the Eastern Cape has announced that an R18-billion Bay West housing project is at “an advanced stage”. Involving the metropolitan municipality of Nelson Mandela Bay and private developers, there are plans for 20 400 affordable units and 5 040 social units. Another area of strong activity is in the building of student accommodation. The Department of Higher Education and Training has seen to it that institutions such as the universities of Fort Hare, Nelson Mandela and Walter Sisulu and the King Hintsa TVET College have each had between 1 000 and 3 000 new beds supplied on their campuses. Student accommodation specialists STAG African are the contractors at Fort Hare. The choice of the Coega Special Economic Zone (Coega SEZ) by companies looking to distribute their products from there has brought work for construction companies. GVK-Siya Zama is engaged in creating a 11 800m² logistics warehouse situated in Zone 1, following green building principles. Energy-efficient heating and ventilation systems, rainwater harvesting and PV solar panels all form part of the plan to

control the ambient temperature for the snack and food items which will be stored there. Coastal properties almost always attract a premium but a new trend towards “semigration” is further boosting prices. Semigration refers to families who live in towns like Knysna or George but the bread-winner commutes to Johannesburg. Towns such as St Francis Bay, Jeffreys Bay and Port Alfred are now becoming the site of primary residences, instead of being exclusively holiday destinations. A new housing development in the rural area of Keiskammahoek attracted funding of R25-million from the Eastern Cape Provincial Department of Human Settlements. Aimed at destitute families, the first phase was conducted in the settlement of Masincedane, and the project will ultimately cater to 1 255 beneficiaries. The Mandela Bay Development Agency (MBDA) has transformed the Old Tramway building at the entrance to the Baakens Valley. The MBDA not only moved into new offices in the renovated building but is letting it out as an events venue. Other retail property developments have happened in the valley (including a popular brewery), drawing attention to the potential of Port Elizabeth’s green lung to be even more useful in future. ■ EASTERN CAPE BUSINESS 2021/22