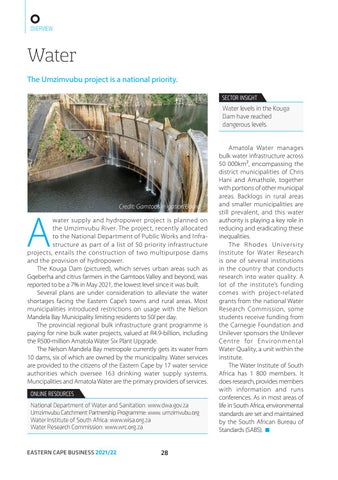 Water The Umzimvubu project is a national priority. SECTOR INSIGHT Water levels in the Kouga Dam have reached dangerous levels.

water supply and hydropower project is planned on the Umzimvubu River. The project, recently allocated to the National Department of Public Works and Infrastructure as part of a list of 50 priority infrastructure projects, entails the construction of two multipurpose dams and the provision of hydropower. The Kouga Dam (pictured), which serves urban areas such as Gqeberha and citrus farmers in the Gamtoos Valley and beyond, was reported to be a 7% in May 2021, the lowest level since it was built. Several plans are under consideration to alleviate the water shortages facing the Eastern Cape’s towns and rural areas. Most municipalities introduced restrictions on usage with the Nelson Mandela Bay Municipality limiting residents to 50l per day. The provincial regional bulk infrastructure grant programme is paying for nine bulk water projects, valued at R4.9-billion, including the R500-million Amatola Water Six Plant Upgrade. The Nelson Mandela Bay metropole currently gets its water from 10 dams, six of which are owned by the municipality. Water services are provided to the citizens of the Eastern Cape by 17 water service authorities which oversee 163 drinking water supply systems. Muncipalities and Amatola Water are the primary providers of services.

Amatola Water manages bulk water infrastructure across 50 000km², encompassing the district municipalities of Chris Hani and Amathole, together with portions of other municipal areas. Backlogs in rural areas and smaller municipalities are still prevalent, and this water authority is playing a key role in reducing and eradicating these inequalities. The Rhodes University Institute for Water Research is one of several institutions in the country that conducts research into water quality. A lot of the institute’s funding comes with project-related grants from the national Water Research Commission, some students receive funding from the Carnegie Foundation and Unilever sponsors the Unilever Centre for Environmental Water Quality, a unit within the institute. The Water Institute of South Africa has 1 800 members. It does research, provides members with information and runs conferences. As in most areas of life in South Africa, environmental standards are set and maintained by the South African Bureau of Standards (SABS). ■