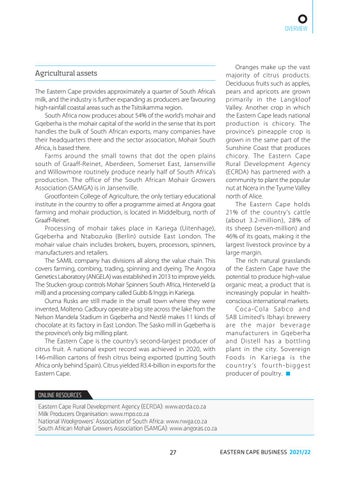 Agricultural assets The Eastern Cape provides approximately a quarter of South Africa’s milk, and the industry is further expanding as producers are favouring high-rainfall coastal areas such as the Tsitsikamma region. South Africa now produces about 54% of the world’s mohair and Gqeberha is the mohair capital of the world in the sense that its port handles the bulk of South African exports, many companies have their headquarters there and the sector association, Mohair South Africa, is based there. Farms around the small towns that dot the open plains south of Graaff-Reinet, Aberdeen, Somerset East, Jansenville and Willowmore routinely produce nearly half of South Africa’s production. The office of the South African Mohair Growers Association (SAMGA) is in Jansenville. Grootfontein College of Agriculture, the only tertiary educational institute in the country to offer a programme aimed at Angora goat farming and mohair production, is located in Middelburg, north of Graaff-Reinet. Processing of mohair takes place in Kariega (Uitenhage), Gqeberha and Ntabozuko (Berlin) outside East London. The mohair value chain includes brokers, buyers, processors, spinners, manufacturers and retailers. The SAMIL company has divisions all along the value chain. This covers farming, combing, trading, spinning and dyeing. The Angora Genetics Laboratory (ANGELA) was established in 2013 to improve yields. The Stucken group controls Mohair Spinners South Africa, Hinterveld (a mill) and a processing company called Gubb &amp; Inggs in Kariega. Ouma Rusks are still made in the small town where they were invented, Molteno. Cadbury operate a big site across the lake from the Nelson Mandela Stadium in Gqeberha and Nestlé makes 11 kinds of chocolate at its factory in East London. The Sasko mill in Gqeberha is the province’s only big milling plant. The Eastern Cape is the country’s second-largest producer of citrus fruit. A national export record was achieved in 2020, with 146-million cartons of fresh citrus being exported (putting South Africa only behind Spain). Citrus yielded R3.4-billion in exports for the Eastern Cape.

Oranges make up the vast majority of citrus products. Deciduous fruits such as apples, pears and apricots are grown primarily in the Langkloof Valley. Another crop in which the Eastern Cape leads national production is chicory. The province’s pineapple crop is grown in the same part of the Sunshine Coast that produces chicory. The Eastern Cape Rural Development Agency (ECRDA) has partnered with a community to plant the popular nut at Ncera in the Tyume Valley north of Alice. The Eastern Cape holds 21% of the country’s cattle (about 3.2-million), 28% of its sheep (seven-million) and 46% of its goats, making it the largest livestock province by a large margin. The rich natural grasslands of the Eastern Cape have the potential to produce high-value organic meat, a product that is increasingly popular in healthconscious international markets. Coca-Cola Sabco and SAB Limited’s Ibhayi brewery a re t h e m a j o r b e v e r a g e manufacturers in Gqeberha and Distell has a bottling plant in the city. Sovereign Fo o d s i n K a r i e g a i s t h e c o u n t r y ’s fo u r t h - b i g g e s t producer of poultry. ■