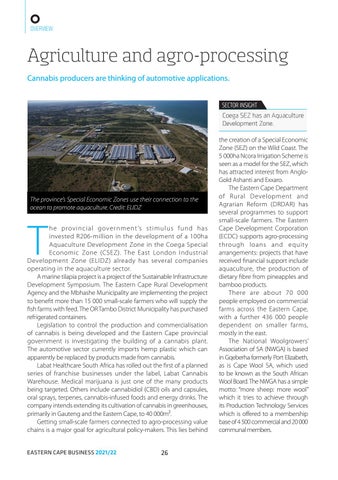 The province’s Special Economic Zones use their connection to the ocean to promote aquaculture. Credit: ELIDZ

he provincial gover nment ’s stimulus fund has invested R206-million in the development of a 100ha Aquaculture Development Zone in the Coega Special Economic Zone (CSEZ). The East London Industrial Development Zone (ELIDZ) already has several companies operating in the aquaculture sector. A marine tilapia project is a project of the Sustainable Infrastructure Development Symposium. The Eastern Cape Rural Development Agency and the Mbhashe Municipality are implementing the project to benefit more than 15 000 small-scale farmers who will supply the fish farms with feed. The OR Tambo District Municipality has purchased refrigerated containers. Legislation to control the production and commercialisation of cannabis is being developed and the Eastern Cape provincial government is investigating the building of a cannabis plant. The automotive sector currently imports hemp plastic which can apparently be replaced by products made from cannabis. Labat Healthcare South Africa has rolled out the first of a planned series of franchise businesses under the label, Labat Cannabis Warehouse. Medical marijuana is just one of the many products being targeted. Others include cannabidiol (CBD) oils and capsules, oral sprays, terpenes, cannabis-infused foods and energy drinks. The company intends extending its cultivation of cannabis in greenhouses, primarily in Gauteng and the Eastern Cape, to 40 000m². Getting small-scale farmers connected to agro-processing value chains is a major goal for agricultural policy-makers. This lies behind EASTERN CAPE BUSINESS 2021/22

the creation of a Special Economic Zone (SEZ) on the Wild Coast. The 5 000ha Ncora Irrigation Scheme is seen as a model for the SEZ, which has attracted interest from AngloGold Ashanti and Exxaro. The Eastern Cape Department of Rural Development and Agrarian Reform (DRDAR) has several programmes to support small-scale farmers. The Eastern Cape Development Corporation (ECDC) supports agro-processing through loans and equity arrangements: projects that have received financial support include aquaculture, the production of dietary fibre from pineapples and bamboo products. There are about 70 000 people employed on commercial farms across the Eastern Cape, with a further 436 000 people dependent on smaller farms, mostly in the east. The National Woolgrowers’ Association of SA (NWGA) is based in Gqeberha formerly Port Elizabeth, as is Cape Wool SA, which used to be known as the South African Wool Board. The NWGA has a simple motto: “more sheep: more wool” which it tries to achieve through its Production Technology Services which is offered to a membership base of 4 500 commercial and 20 000 communal members.