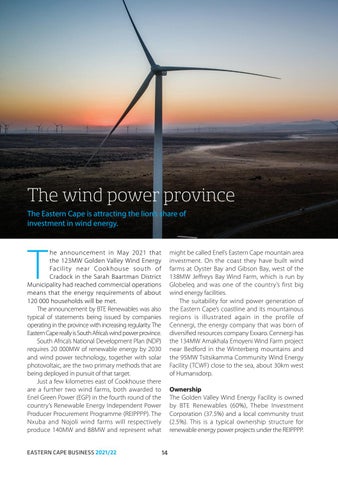 The wind power province The Eastern Cape is attracting the lion’s share of investment in wind energy.

he announcement in May 2021 that the 123MW Golden Valley Wind Energy Facility near Cook house south of Cradock in the Sarah Baartman District Municipality had reached commercial operations means that the energy requirements of about 120 000 households will be met. The announcement by BTE Renewables was also typical of statements being issued by companies operating in the province with increasing regularity. The Eastern Cape really is South Africa’s wind power province. South Africa’s National Development Plan (NDP) requires 20 000MW of renewable energy by 2030 and wind power technology, together with solar photovoltaic, are the two primary methods that are being deployed in pursuit of that target. Just a few kilometres east of Cookhouse there are a further two wind farms, both awarded to Enel Green Power (EGP) in the fourth round of the country’s Renewable Energy Independent Power Producer Procurement Programme (REIPPPP). The Nxuba and Nojoli wind farms will respectively produce 140MW and 88MW and represent what EASTERN CAPE BUSINESS 2021/22

might be called Enel’s Eastern Cape mountain area investment. On the coast they have built wind farms at Oyster Bay and Gibson Bay, west of the 138MW Jeffreys Bay Wind Farm, which is run by Globeleq and was one of the country’s first big wind energy facilities. The suitability for wind power generation of the Eastern Cape’s coastline and its mountainous regions is illustrated again in the profile of Cennergi, the energy company that was born of diversified resources company Exxaro. Cennergi has the 134MW Amakhala Emoyeni Wind Farm project near Bedford in the Winterberg mountains and the 95MW Tsitsikamma Community Wind Energy Facility (TCWF) close to the sea, about 30km west of Humansdorp. Ownership The Golden Valley Wind Energy Facility is owned by BTE Renewables (60%), Thebe Investment Corporation (37.5%) and a local community trust (2.5%). This is a typical ownership structure for renewable energy power projects under the REIPPPP.