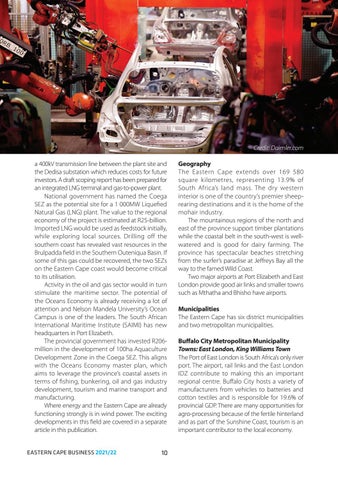 Credit: Daimler.com a 400kV transmission line between the plant site and the Dedisa substation which reduces costs for future investors. A draft scoping report has been prepared for an integrated LNG terminal and gas-to-power plant. National government has named the Coega SEZ as the potential site for a 1 000MW Liquefied Natural Gas (LNG) plant. The value to the regional economy of the project is estimated at R25-billion. Imported LNG would be used as feedstock initially, while exploring local sources. Drilling off the southern coast has revealed vast resources in the Brulpadda field in the Southern Outeniqua Basin. If some of this gas could be recovered, the two SEZs on the Eastern Cape coast would become critical to its utilisation. Activity in the oil and gas sector would in turn stimulate the maritime sector. The potential of the Oceans Economy is already receiving a lot of attention and Nelson Mandela University’s Ocean Campus is one of the leaders. The South African International Maritime Institute (SAIMI) has new headquarters in Port Elizabeth. The provincial government has invested R206million in the development of 100ha Aquaculture Development Zone in the Coega SEZ. This aligns with the Oceans Economy master plan, which aims to leverage the province’s coastal assets in terms of fishing, bunkering, oil and gas industry development, tourism and marine transport and manufacturing. Where energy and the Eastern Cape are already functioning strongly is in wind power. The exciting developments in this field are covered in a separate article in this publication. EASTERN CAPE BUSINESS 2021/22

Geography The Eastern Cape extends over 169 580 square kilometres, representing 13.9% of South Africa’s land mass. The dry western interior is one of the country’s premier sheeprearing destinations and it is the home of the mohair industry. The mountainous regions of the north and east of the province support timber plantations while the coastal belt in the south-west is wellwatered and is good for dairy farming. The province has spectacular beaches stretching from the surfer’s paradise at Jeffreys Bay all the way to the famed Wild Coast. Two major airports at Port Elizabeth and East London provide good air links and smaller towns such as Mthatha and Bhisho have airports. Municipalities The Eastern Cape has six district municipalities and two metropolitan municipalities. Buffalo City Metropolitan Municipality Towns: East London, King Williams Town The Port of East London is South Africa’s only river port. The airport, rail links and the East London IDZ contribute to making this an important regional centre. Buffalo City hosts a variety of manufacturers from vehicles to batteries and cotton textiles and is responsible for 19.6% of provincial GDP. There are many opportunities for agro-processing because of the fertile hinterland and as part of the Sunshine Coast, tourism is an important contributor to the local economy.