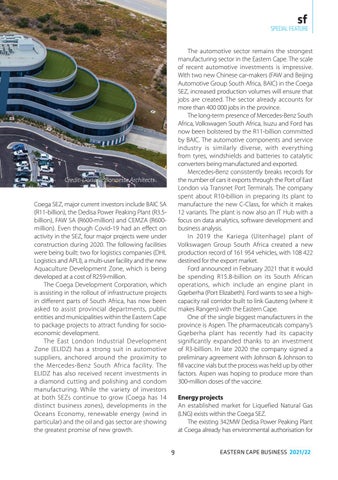 SPECIAL FEATURE The automotive sector remains the strongest manufacturing sector in the Eastern Cape. The scale of recent automotive investments is impressive. With two new Chinese car-makers (FAW and Beijing Automotive Group South Africa, BAIC) in the Coega SEZ, increased production volumes will ensure that jobs are created. The sector already accounts for more than 400 000 jobs in the province. The long-term presence of Mercedes-Benz South Africa, Volkswagen South Africa, Isuzu and Ford has now been bolstered by the R11-billion committed by BAIC. The automotive components and service industry is similarly diverse, with everything from tyres, windshields and batteries to catalytic converters being manufactured and exported. Mercedes-Benz consistently breaks records for the number of cars it exports through the Port of East London via Transnet Port Terminals. The company spent about R10-billion in preparing its plant to manufacture the new C-Class, for which it makes 12 variants. The plant is now also an IT Hub with a focus on data analytics, software development and business analysis. In 2019 the Kariega (Uitenhage) plant of Volkswagen Group South Africa created a new production record of 161 954 vehicles, with 108 422 destined for the export market. Ford announced in February 2021 that it would be spending R15.8-billion on its South African operations, which include an engine plant in Gqeberha (Port Elizabeth). Ford wants to see a highcapacity rail corridor built to link Gauteng (where it makes Rangers) with the Eastern Cape. One of the single biggest manufacturers in the province is Aspen. The pharmaceuticals company’s Gqeberha plant has recently had its capacity significantly expanded thanks to an investment of R3-billion. In late 2020 the company signed a preliminary agreement with Johnson &amp; Johnson to fill vaccine vials but the process was held up by other factors. Aspen was hoping to produce more than 300-million doses of the vaccine.

Credit: Dominic Bonnesse Architects Coega SEZ, major current investors include BAIC SA (R11-billion), the Dedisa Power Peaking Plant (R3.5billion), FAW SA (R600-million) and CEMZA (R600million). Even though Covid-19 had an effect on activity in the SEZ, four major projects were under construction during 2020. The following facilities were being built: two for logistics companies (DHL Logistics and APLI), a multi-user facility and the new Aquaculture Development Zone, which is being developed at a cost of R259-million. The Coega Development Corporation, which is assisting in the rollout of infrastructure projects in different parts of South Africa, has now been asked to assist provincial departments, public entities and municipalities within the Eastern Cape to package projects to attract funding for socioeconomic development. The East London Industrial Development Zone (ELIDZ) has a strong suit in automotive suppliers, anchored around the proximity to the Mercedes-Benz South Africa facility. The ELIDZ has also received recent investments in a diamond cutting and polishing and condom manufacturing. While the variety of investors at both SEZs continue to grow (Coega has 14 distinct business zones), developments in the Oceans Economy, renewable energy (wind in particular) and the oil and gas sector are showing the greatest promise of new growth.