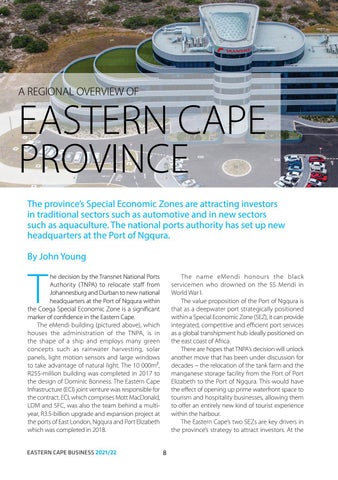 EASTERN CAPE PROVINCE The province’s Special Economic Zones are attracting investors in traditional sectors such as automotive and in new sectors such as aquaculture. The national ports authority has set up new headquarters at the Port of Ngqura. By John Young

he decision by the Transnet National Ports Authority (TNPA) to relocate staff from Johannesburg and Durban to new national headquarters at the Port of Ngqura within the Coega Special Economic Zone is a significant marker of confidence in the Eastern Cape. The eMendi building (pictured above), which houses the administration of the TNPA, is in the shape of a ship and employs many green concepts such as rainwater harvesting, solar panels, light motion sensors and large windows to take advantage of natural light. The 10 000m², R255-million building was completed in 2017 to the design of Dominic Bonness. The Eastern Cape Infrastructure (ECI) joint venture was responsible for the contract. ECI, which comprises Mott MacDonald, LDM and SFC, was also the team behind a multiyear, R3.5-billion upgrade and expansion project at the ports of East London, Ngqura and Port Elizabeth which was completed in 2018. EASTERN CAPE BUSINESS 2021/22

The name eMendi honours the black servicemen who drowned on the SS Mendi in World War I. The value proposition of the Port of Ngqura is that as a deepwater port strategically positioned within a Special Economic Zone (SEZ), it can provide integrated, competitive and efficient port services as a global transhipment hub ideally positioned on the east coast of Africa. There are hopes that TNPA’s decision will unlock another move that has been under discussion for decades – the relocation of the tank farm and the manganese storage facility from the Port of Port Elizabeth to the Port of Ngqura. This would have the effect of opening up prime waterfront space to tourism and hospitality businesses, allowing them to offer an entirely new kind of tourist experience within the harbour. The Eastern Cape’s two SEZs are key drivers in the province’s strategy to attract investors. At the