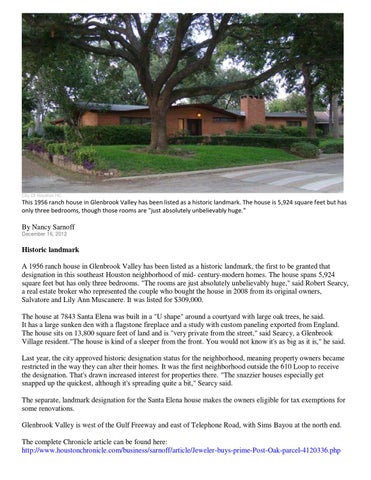 This 1956 ranch house in Glenbrook Valley has been listed as a historic landmark. The house is 5,924 square feet but has only three bedrooms, though those rooms are &quot;just absolutely unbelievably huge.&quot;

Historic landmark A 1956 ranch house in Glenbrook Valley has been listed as a historic landmark, the first to be granted that designation in this southeast Houston neighborhood of mid- century-modern homes. The house spans 5,924 square feet but has only three bedrooms. &quot;The rooms are just absolutely unbelievably huge,&quot; said Robert Searcy, a real estate broker who represented the couple who bought the house in 2008 from its original owners, Salvatore and Lily Ann Muscanere. It was listed for $309,000. The house at 7843 Santa Elena was built in a &quot;U shape&quot; around a courtyard with large oak trees, he said. It has a large sunken den with a flagstone fireplace and a study with custom paneling exported from England. The house sits on 13,800 square feet of land and is &quot;very private from the street,&quot; said Searcy, a Glenbrook Village resident.&quot;The house is kind of a sleeper from the front. You would not know it&#39;s as big as it is,&quot; he said. Last year, the city approved historic designation status for the neighborhood, meaning property owners became restricted in the way they can alter their homes. It was the first neighborhood outside the 610 Loop to receive the designation. That&#39;s drawn increased interest for properties there. &quot;The snazzier houses especially get snapped up the quickest, although it&#39;s spreading quite a bit,&quot; Searcy said. The separate, landmark designation for the Santa Elena house makes the owners eligible for tax exemptions for some renovations. Glenbrook Valley is west of the Gulf Freeway and east of Telephone Road, with Sims Bayou at the north end. The complete Chronicle article can be found here: http://www.houstonchronicle.com/business/sarnoff/article/Jeweler-buys-prime-Post-Oak-parcel-4120336.php 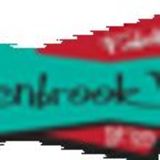