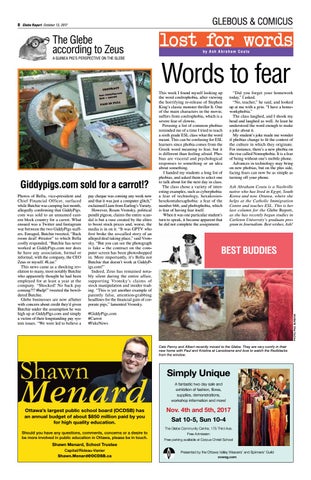 Giddypigs.com sold for a carrot!? pay cheque was coming any week now and that it was just a computer glitch,” exclaimed Liam from Earling’s Variety. However, Roam Vronsky, political pundit pigeon, claims the entire scandal is but a ruse created by the elites to boost stock prices and, worse, the media is in on it. “It was GPTV who first broke the so-called story of an alleged deal taking place,” said Vronsky. “But you can see the photograph is fake – the contract on the computer screen has been photoshopped in. More importantly, it’s Bella not Butchie that doesn’t work at GiddyPigs.com!” Indeed, Zeus has remained notably silent during the entire affair, supporting Vronsky’s claims of stock manipulation and insider trading. “This is yet another example of patently false, attention-grabbing headlines for the financial gain of corporate pigs,” lamented Vronsky.

Words to fear This week I found myself looking up the word coulrophobia, after viewing the horrifying re-release of Stephen King’s classic monster thriller It. One of the main characters in the movie, suffers from coulrophobia, which is a severe fear of clowns. Perusing a list of common phobias reminded me of a time I tried to teach a sixth grade ESL class what the word meant. This can be confusing for ESL learners since phobia comes from the Greek word meaning to fear, but it is different than feeling afraid. Phobias are visceral and psychological responses to something or an idea about something. I handed my students a long list of phobias, and asked them to select one to talk about for the next day in class. The class chose a variety of interesting examples, such as cyberphobia: a fear of technology, hexakosioihexekontahexaphobia: a fear of the number 666, and phobophobia, which is fear of having fear itself. When it was one particular student’s turn to speak, it became apparent that he did not complete the assignment.

“Did you forget your homework today,” I asked. “No, teacher,” he said, and looked up at me with a grin. “I have a homeworkphobia.” The class laughed, and I shook my head and laughed as well. At least he understood the word enough to make a joke about it. My student’s joke made me wonder if phobias change to fit the context of the culture in which they originate. For instance, there’s a new phobia on the rise called Nomophobia. It is a fear of being without one’s mobile phone. Advances in technology may bring on new phobias, but on the plus side, facing fears can now be as simple as turning off your phone. Ash Abraham Coutu is a Nashville native who has lived in Egypt, South Korea and now Ottawa, where she helps at the Catholic Immigration Centre and teaches ESL. This is her last column for the Glebe Report, as she has recently begun studies in Carleton University’s graduate program in Journalism. Best wishes, Ash!

Photos of Bella, vice-president and Chief Financial Officer, surfaced while Butchie was camping last month, allegedly confirming that GiddyPigs. com was sold to an unnamed eastern block country for a carrot. What ensued was a Twitter and Instagram war between the two GiddyPigs staffers. Enraged, Butchie tweeted, “Back room deal! #traitor” to which Bella coolly responded, “Butchie has never worked at GiddyPigs.com nor does he have any association, formal or informal, with the company, the CEO Zeus or myself. #Liar.” This news came as a shocking revelation to many, most notably Butchie who apparently thought he had been employed for at least a year at the company. “Shocked! No back pay coming?!? #help!” tweeted the bewildered Butchie. Glebe businesses are now aflutter with concern about credit they’d given Butchie under the assumption he was high up at GiddyPigs.com and simply a victim of their longstanding pay system issues. “We were led to believe a

Cats Penny and Albert recently moved to the Glebe. They are very comfy in their new home with Paul and Kristina at Lansdowne and love to watch the Redblacks from the window.

Ottawa’s largest public school board (OCDSB) has an annual budget of about $850 million paid by you for high quality education. Should you have any questions, comments, concerns or a desire to be more involved in public education in Ottawa, please be in touch.

Presented by the Ottawa Valley Weavers’ and Spinners’ Guild ovwsg.com 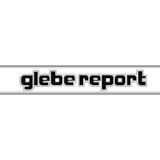