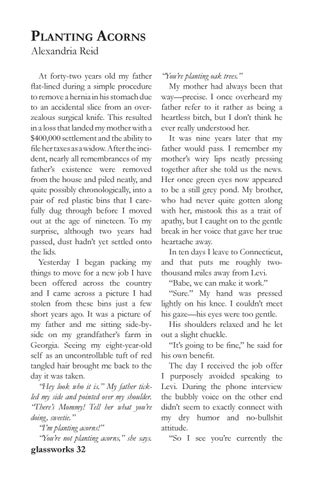 At forty-two years old my father flat-lined during a simple procedure to remove a hernia in his stomach due to an accidental slice from an overzealous surgical knife. This resulted in a loss that landed my mother with a $400,000 settlement and the ability to file her taxes as a widow. After the incident, nearly all remembrances of my father’s existence were removed from the house and piled neatly, and quite possibly chronologically, into a pair of red plastic bins that I carefully dug through before I moved out at the age of nineteen. To my surprise, although two years had passed, dust hadn’t yet settled onto the lids. Yesterday I began packing my things to move for a new job I have been offered across the country and I came across a picture I had stolen from these bins just a few short years ago. It was a picture of my father and me sitting side-byside on my grandfather’s farm in Georgia. Seeing my eight-year-old self as an uncontrollable tuft of red tangled hair brought me back to the day it was taken. “Hey look who it is.” My father tickled my side and pointed over my shoulder. “There’s Mommy! Tell her what you’re doing, sweetie.” “I’m planting acorns!” “You’re not planting acorns,” she says.

“You’re planting oak trees.” My mother had always been that way—precise. I once overheard my father refer to it rather as being a heartless bitch, but I don’t think he ever really understood her. It was nine years later that my father would pass. I remember my mother’s wiry lips neatly pressing together after she told us the news. Her once green eyes now appeared to be a still grey pond. My brother, who had never quite gotten along with her, mistook this as a trait of apathy, but I caught on to the gentle break in her voice that gave her true heartache away. In ten days I leave to Connecticut, and that puts me roughly twothousand miles away from Levi. “Babe, we can make it work.” “Sure.” My hand was pressed lightly on his knee. I couldn’t meet his gaze—his eyes were too gentle. His shoulders relaxed and he let out a slight chuckle. “It’s going to be fine,” he said for his own benefit. The day I received the job offer I purposely avoided speaking to Levi. During the phone interview the bubbly voice on the other end didn’t seem to exactly connect with my dry humor and no-bullshit attitude. “So I see you’re currently the

Issue 22: a publication of Rowan University's Master of Arts in Writing 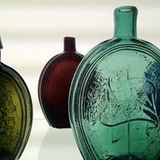