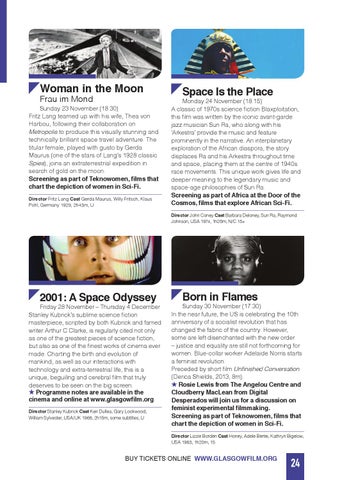 Sunday 23 November (18.30) Fritz Lang teamed up with his wife, Thea von Harbou, following their collaboration on Metropolis to produce this visually stunning and technically brilliant space travel adventure. The titular female, played with gusto by Gerda Maurus (one of the stars of Lang’s 1928 classic Spies), joins an extraterrestrial expedition in search of gold on the moon. Screening as part of Teknowomen, films that chart the depiction of women in Sci-Fi. Director Fritz Lang Cast Gerda Maurus, Willy Fritsch, Klaus Pohl, Germany 1929, 2h43m, U

Space Is the Place

Monday 24 November (18.15) A classic of 1970s science fiction Blaxploitation, this film was written by the iconic avant-garde jazz musician Sun Ra, who along with his ‘Arkestra’ provide the music and feature prominently in the narrative. An interplanetary exploration of the African diaspora, the story displaces Ra and his Arkestra throughout time and space, placing them at the centre of 1940s race movements. This unique work gives life and deeper meaning to the legendary music and space-age philosophies of Sun Ra. Screening as part of Africa at the Door of the Cosmos, films that explore African Sci-Fi. Director John Coney Cast Barbara Deloney, Sun Ra, Raymond Johnson, USA 1974, 1h25m, N/C 15+

Friday 28 November – Thursday 4 December Stanley Kubrick’s sublime science fiction masterpiece, scripted by both Kubrick and famed writer Arthur C Clarke, is regularly cited not only as one of the greatest pieces of science fiction, but also as one of the finest works of cinema ever made. Charting the birth and evolution of mankind, as well as our interactions with technology and extra-terrestrial life, this is a unique, beguiling and cerebral film that truly deserves to be seen on the big screen. Programme notes are available in the cinema and online at www.glasgowfilm.org Director Stanley Kubrick Cast Keir Dullea, Gary Lockwood, William Sylvester, USA/UK 1968, 2h15m, some subtitles, U

Sunday 30 November (17.30) In the near future, the US is celebrating the 10th anniversary of a socialist revolution that has changed the fabric of the country. However, some are left disenchanted with the new order – justice and equality are still not forthcoming for women. Blue-collar worker Adelaide Norris starts a feminist revolution. Preceded by short film Unfinished Conversation (Derica Shields, 2013, 8m). Rosie Lewis from The Angelou Centre and Cloudberry MacLean from Digital Desperados will join us for a discussion on feminist experimental filmmaking. Screening as part of Teknowomen, films that chart the depiction of women in Sci-Fi. Director Lizzie Borden Cast Honey, Adele Bertei, Kathryn Bigelow, USA 1983, 1h20m, 15 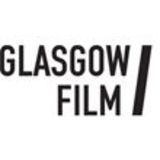