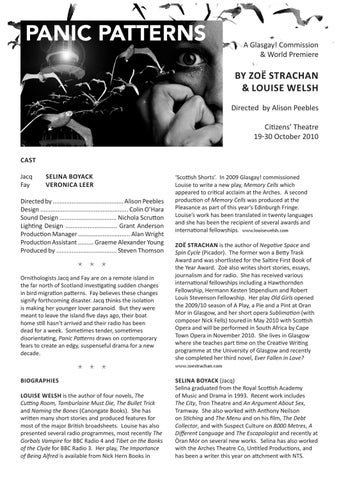 Ornithologists Jacq and Fay are on a remote island in the far north of Scotland investigating sudden changes in bird migration patterns. Fay believes these changes signify forthcoming disaster. Jacq thinks the isolation is making her younger lover paranoid. But they were meant to leave the island five days ago, their boat home still hasn’t arrived and their radio has been dead for a week. Sometimes tender, sometimes disorientating, Panic Patterns draws on contemporary fears to create an edgy, suspenseful drama for a new decade. Ô

BIOGRAPHIES LOUISE WELSH is the author of four novels, The Cutting Room, Tamburlaine Must Die, The Bullet Trick and Naming the Bones (Canongate Books). She has written many short stories and produced features for most of the major British broadsheets. Louise has also presented several radio programmes, most recently The Gorbals Vampire for BBC Radio 4 and Tibet on the Banks of the Clyde for BBC Radio 3. Her play, The Importance of Being Alfred is available from Nick Hern Books in

‘Scottish Shorts’. In 2009 Glasgay! commissioned Louise to write a new play, Memory Cells which appeared to critical acclaim at the Arches. A second production of Memory Cells was produced at the Pleasance as part of this year’s Edinburgh Fringe. Louise’s work has been translated in twenty languages and she has been the recipient of several awards and international fellowships. www.louisewelsh.com ZOË STRACHAN is the author of Negative Space and Spin Cycle (Picador). The former won a Betty Trask Award and was shortlisted for the Saltire First Book of the Year Award. Zoë also writes short stories, essays, journalism and for radio. She has received various international fellowships including a Hawthornden Fellowship, Hermann Kesten Stipendium and Robert Louis Stevenson Fellowship. Her play Old Girls opened the 2009/10 season of A Play, a Pie and a Pint at Oran Mor in Glasgow, and her short opera Sublimation (with composer Nick Fells) toured in May 2010 with Scottish Opera and will be performed in South Africa by Cape Town Opera in November 2010. She lives in Glasgow where she teaches part time on the Creative Writing programme at the University of Glasgow and recently she completed her third novel, Ever Fallen in Love? www.zoestrachan.com

SELINA BOYACK (Jacq) Selina graduated from the Royal Scottish Academy of Music and Drama in 1993. Recent work includes The City, Tron Theatre and An Argument About Sex, Tramway. She also worked with Anthony Neilson on Stiching and The Menu and on his film, The Debt Collector, and with Suspect Culture on 8000 Metres, A Different Language and The Escapologist and recently at Òran Mór on several new works. Selina has also worked with the Arches Theatre Co, Untitled Productions, and has been a writer this year on attchment with NTS.

VERONICA LEER (Fay) Veronica trained at the RSAMD and is delighted to have worked on this piece of new writing for Glasgay. Some of her favourite roles include Helen in The Cripple of Innishmann, Charlotte in Charlotte’s Web, Mabel in An Ideal Husband and Puck in A Midsummer Nights Dream. Most recently she played the Deputy First Minister of Northern Ireland in the radio play Trouble and Shame by David Ireland. ALISON PEEBLES (Director) Alison Peebles has directed many productions for Theatre, Radio and Film including the first production for National Theatre of Scotland, Home –Aberdeen; Award-winning Feature Film AfterLife and documentary Multiple about her life with MS. which she also coproduced. As an actor she has had a celebrated career most recently playing Sister Alysious in Doubt at The Tron and Sheila Carroll in River City. COLIN O’HARA (Design) Colin O’Hara is a Glasgow based Architect and Interior Designer with his own company, coh design. This is his third full scale theatre design for Glasgay. in 2008 he designed Tennessee William’s And Tell The Sad Stories of the Death of Queens. In 2009 he designed Memory Cells by Louise Welsh. This is his second production at the Citz. His work can also be seen at the GFT café bar and in numerous homes around Glasgow.

Nichola would like to thank Creative Scotland for additional support; David Code, Nick Fells and the University of Glasgow (Music) for equipment. ALUN WRIGHT (Production Manager) Alun works as a production manager between the UK and Egypt, where he also teaches stage management to young theatre makers. Last year he came back to the UK to re-establish professional ties and to work for Glasgay on The Maw Broon Monologues by Jackie Kay. 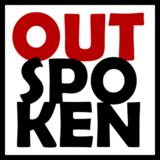