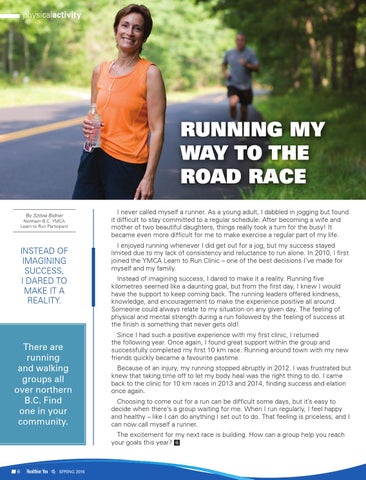 RUNNING MY WAY TO THE ROAD RACE By Szilvia Bidner

INSTEAD OF IMAGINING SUCCESS, I DARED TO MAKE IT A REALITY.

There are running and walking groups all over northern B.C. Find one in your community.

I never called myself a runner. As a young adult, I dabbled in jogging but found it difficult to stay committed to a regular schedule. After becoming a wife and mother of two beautiful daughters, things really took a turn for the busy! It became even more difficult for me to make exercise a regular part of my life. I enjoyed running whenever I did get out for a jog, but my success stayed limited due to my lack of consistency and reluctance to run alone. In 2010, I first joined the YMCA Learn to Run Clinic – one of the best decisions I’ve made for myself and my family. Instead of imagining success, I dared to make it a reality. Running five kilometres seemed like a daunting goal, but from the first day, I knew I would have the support to keep coming back. The running leaders offered kindness, knowledge, and encouragement to make the experience positive all around. Someone could always relate to my situation on any given day. The feeling of physical and mental strength during a run followed by the feeling of success at the finish is something that never gets old! Since I had such a positive experience with my first clinic, I returned the following year. Once again, I found great support within the group and successfully completed my first 10 km race. Running around town with my new friends quickly became a favourite pastime. Because of an injury, my running stopped abruptly in 2012. I was frustrated but knew that taking time off to let my body heal was the right thing to do. I came back to the clinic for 10 km races in 2013 and 2014, finding success and elation once again. Choosing to come out for a run can be difficult some days, but it’s easy to decide when there’s a group waiting for me. When I run regularly, I feel happy and healthy – like I can do anything I set out to do. That feeling is priceless, and I can now call myself a runner. The excitement for my next race is building. How can a group help you reach your goals this year? 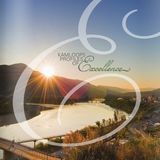