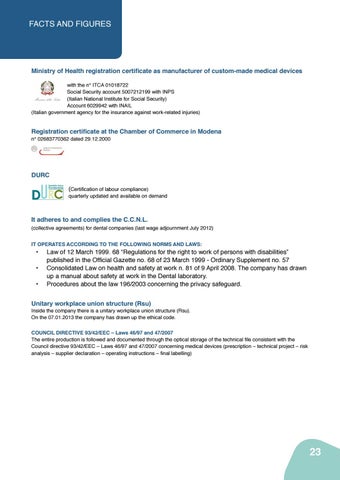 quarterly updated and available on demand

It adheres to and complies the C.C.N.L.

(collective agreements) for dental companies (last wage adjournment July 2012) It operates according to the following norms and laws:

Law of 12 March 1999. 68 “Regulations for the right to work of persons with disabilities” published in the Official Gazette no. 68 of 23 March 1999 - Ordinary Supplement no. 57 Consolidated Law on health and safety at work n. 81 of 9 April 2008. The company has drawn up a manual about safety at work in the Dental laboratory. Procedures about the law 196/2003 concerning the privacy safeguard.

Inside the company there is a unitary workplace union structure (Rsu). On the 07.01.2013 the company has drawn up the ethical code. COUNCIL DIRECTIVE 93/42/EEC – Laws 46/97 and 47/2007 The entire production is followed and documented through the optical storage of the technical file consistent with the Council directive 93/42/EEC – Laws 46/97 and 47/2007 concerning medical devices (prescription – technical project – risk analysis – supplier declaration – operating instructions – final labelling)