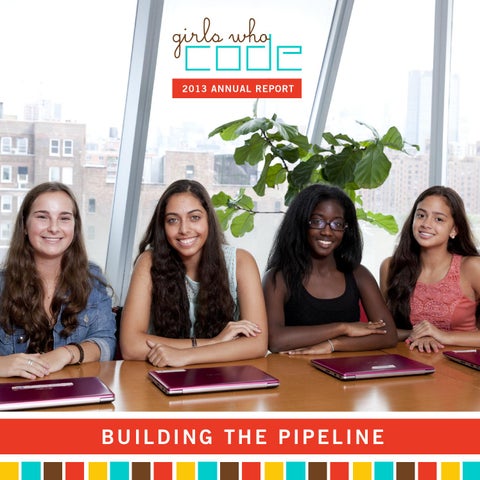 GIRLS WHO CODE PROGRAMS WORK TO INSPIRE, EDUCATE, AND EQUIP GIRLS WITH THE COMPUTING SKILLS TO PURSUE 21ST CENTURY OPPORTUNITIES.

GIRLS WHO CODE IS MORE THAN JUST A PROGRAM, IT’S A MOVEMENT.

DEAR FRIENDS, Two years ago, we decided to act. The future of our country’s economy clearly pointed to an increasing reliance on technical professionals, and our businesses were facing a shortage of qualified workers. Moreover, those who currently held these jobs were decidedly male, and not enough females were coming forward to apply despite the fact that women are the majority of the workforce. One by one, leaders from our technology, education, and nonprofit sectors came forward and expressed the same frustration: “This is a problem. What we’re doing is not working. We’ve got to do something else.” With our national well-being at stake and the potential to empower a generation of young women for some of the most lucrative careers of our time on the table, we reached a decision: it was time to inspire girls to pursue technology and equip them with the skills and confidence to do so successfully. Girls Who Code was born. From the outset, we set clear priorities: the girls we serve are our most important constituents, and we are committed to providing with them with the best education and best experience possible. To that end, we committed to being smart—to learning from others in the field, to being creative and testing innovative models, to assessing and evaluating our work exhaustively, to iterating and constantly seeking improvements, and to sharing what we learn with the community, and the world. Today, as we proudly present our 2013 Annual Report, the results speak for themselves. Our pilot Summer Immersion Program grew 700% in the last year, effectively equipping 152

girls from five cities with the skills needed to succeed in computer science. Building off this success, we launched Girls Who Code Clubs, the first ever low-cost, high-impact model designed to bring computer science education to girls everywhere. Most importantly, our students — our country’s future CEOs, innovators, activists, and entrepreneurs — are thriving. They are designing innovative products that companies want to bring to market. They are going home and teaching their sisters and their fathers how to code. They are cheerleading each other’s successes and supporting one another through failures. They are falling in love with technology. Across the country, 94% of Girls Who Code graduates are considering pursuing computer science in college. Nationwide, only 0.3% of their peers say the same. Girls Who Code is doing something right, and we’re just getting started. In 2014, we’re committed to continuing to expand our proven Summer Immersion Program and dramatically scaling the Girls Who Code Clubs. We thank our corporate, foundation, and individual partners who believed in and kindled our dream two years ago and who make it a reality today. We thank our wide network of supporters who know that achieving gender parity in technology is a critical issue and are committed to strengthening our solution. We thank our tremendous students and their families for joining our movement and inspiring us every day with their passion, curiosity, and confidence. We thank our Board of Directors and fantastic team for making all this happen. To everyone who has supported us in turning this dream into a reality, we thank you. Together, we are changing the world. All the best,

YOU CAN CHANGE THE WORLD THROUGH COMPUTER SCIENCE.

OUR WORK THROUGH OUR INNOVATIVE SUMMER IMMERSION PROGRAMS AND COMMUNITY-BASED GIRLS WHO CODE CLUBS, GIRLS WHO CODE IS CHANGING THE FACE OF COMPUTER SCIENCE.

STAFF ON THE GROUND

I AM DETERMINED TO HELP CLOSE THE GENDER GAP, AND I WILL SHOW THE WORLD WHAT US GIRLS WHO CODE ARE MADE OF.

WHAT I WANT FOR ALL OF YOU IS TO LEAVE THIS SUMMER BELIEVING THAT YOU CAN BE JUST AS GOOD AT ANY FIELD INCLUDING MATH, SCIENCE, OR COMPUTER SCIENCE AS ANY MAN.

SUMMER IMMERSION PROGRAM The Girls Who Code Summer Immersion Program is an innovative approach to computer science education. We pair intensive classroom instruction with diverse exposure opportunities and high-touch mentorship by the tech industry’s top female leaders. The results are astounding. In 2013, with the support of Twitter, Intel, Goldman Sachs, AT&T, General Electric, IAC, eBay, Cornell Tech, and The John S. and James L. Knight Foundation, Girls Who Code implemented 8 Summer Immersion Programs across 5 cities nationwide reaching 152 girls. Across all eight programs, Girls Who Code equipped these young women – from backgrounds as diverse as the communities in which we operate – with skills, exposure, and support by delivering:

GIRLS WHO CODE WAS THE BEST DECISION OF MY LIFE. Kafilah Muhammad

GIRLS WHO CODE CLUBS Girls Who Code Clubs is the organizationâ&#x20AC;&#x2122;s latest innovation â&#x20AC;&#x201D; a low-cost, high-impact program designed for implementation at scale. In 2013, following the success of the Summer Immersion Program and with a proven curriculum in hand, Girls Who Code launched a pilot program to determine the most effective means of reaching more girls with high-quality computer science education.

THE ANSWER . . . GIRLS WHO CODE CLUBS A year-long program offering monthly project-based activities and curricular objectives designed for implementation in any setting, and led by industry professionals trained by Girls Who Code in curriculum delivery and classroom management.

WHEN I GROW UP, I WANT TO BE A COMPUTER SCIENTIST. 

OUR RESULTS Girls Who Codeâ&#x20AC;&#x2122;s work is leading and informing the field, closing the gender gap in technology by effectively preparing young women to pursue academic and career opportunities in computing fields.

DEFINITELY INTEND TO PURSUE A CAREER IN TECHNOLOGY

Students received a median score of 87% on the final technical survey, with questions * culled from CS101 exams from Stanford, Carnegie Mellon and Bryn Mawr as well as the AP Computer Science test. Summer Immersion Program graduate in New York, California, and Michigan were * toIf every take the AP Computer Science exam, this alone would increase the number of female test takers by 15% in these states.

NIKITA WAS INVITED TO PRESENT HER GWC FINAL PROJECT, “TREE SITTER,” AT THE 2013 WHITE HOUSE SCIENCE FAIR. “Tree Sitter” is an Android mobile application built atop the Twitter API, designed to advocate for the environment by giving users an easily accessible tool to make a difference.

2013 HIGHLIGHTS Natasha, emboldened by her newfound passion for computer science, returned to her school and recruited her friends to join the Girls Who Code club she started.

“I’m getting other girls inspired to choose this field as well, and then there will be even more of us challenging the gender gap. I would have never imagined that I would become so interested in this field — I think it feels pretty AMAZING to be a Girl Who Codes.”

Theresa galvanized corporate sponsors to organize a blow out two-day hackathon for high school students. High School Hacks is the largest event of its kind, inviting teens to build “something to wow the crowd or have the potential to improve people’s lives.”

O PENING A GATEWAY FOR GIRLS TO ENTER THE COMPUTER FIELD The New York Times, April 2013

FINANCIALS + FUNDRAISING In 2013, Girls Who Code initiated a period of tremendous growth. With a budget of $916,658, Girls Who Code expanded its Summer Immersion Program by 700% and launched an innovative new program, Girls Who Code Clubs, reaching 600 students this year.

THIS SUCCESS WAS MADE POSSIBLE BY OUR GENEROUS PROGRAM PARTNERS

PHONES AND COMPUTERS FOR SUMMER IMMERSION PROGRAMS DONATED BY MICROSOFT

The John S. and James L.

BY APPNEXUS AND GE

The Biz and Livia Stone

1000+ SMALL DOLLAR DONORS AROUND THE WORLD

700+ PROFESSIONALS ENGAGED IN DEVELOPMENT AND DELIVERY OF PROGRAMMING

VISION FOR 2014 IN 2014, GIRLS WHO CODE IS POISED TO DRAMATICALLY EXPAND ITS REACH, AND FOR THE FIRST TIME IN OUR NATION’S HISTORY, ENABLE YOUNG WOMEN IN COMMUNITIES ACROSS THE COUNTRY TO ACCESS HIGH-QUALITY COMPUTER SCIENCE EDUCATION. 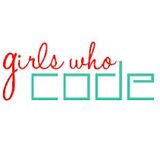