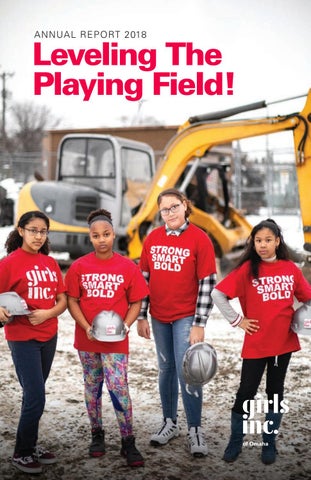 The Girls Inc. Experience At Girls Inc., we provide the girls we serve with the mentoring relationships, pro-girl environment, and hands-on programming to help them navigate gender, economic, and social barriers. We level the playing field so girls can grow up healthy, educated, and independent.

ONE PARENT AT A TIME

MULTI-RACIAL/ MORE THAN ONE

2,290 Total # of girls served through outreach

How Do We Level The Playing Field? For one, we offer comprehensive sex education. Although teen pregnancies have decreased over time, ethnic and racial disparities persist in the neighborhoods we serve.

of Girls Inc. teens say getting pregnant would interfere with school.

of Girls Inc. teens had sexual intercourse compared to 33% in Nebraska.

The consequences of teen pregnancy disproportionately impact teen girls compared to teen boys. Thirty percent of all teenage girls who drop out of school cite pregnancy or parenthood as key reasons. |5

of Girls Inc. girls participated on a sport team.

of our members are happy with their bodies compared to 48% nationally.

STRONG: Healthy Girls from low-income families are more likely to grow up with health challenges such as asthma, obesity, and a lack of nutritious foods. Nebraska ranks 24th in the nation for gender equity in high school sports. We provide opportunities for girls to access health care, learn about healthy foods and cooking, and to exercise their bodies (including male dominated sports like golf!). We serve healthy snacks and help girls learn to deal with stress in healthy ways like yoga. We offer medical services in our onsite Nebraska Medicine clinic.

of the girls said they ate fruit in the prior 24 hours.

of the girls exercised 5 or more days the prior week.

SMART: Educated 1 in 7 girls in the U.S. will not finish high school on time. Girls Inc. provides homework help every day as well as research-based programs in literacy and STEM.

There is a huge demand for STEM employees, but only 31% of post-secondary STEM degrees go to women. Women of color comprise fewer than 1 in 10 employed

of girls say they care about doing well in school.

of girls say they finish all of their homework.

are curious to learn more about science, computing, & technology.

a Girls Inc. alum, graduated from University of Nebraska Omaha in May. Now her two daughters, Kaâ&#x20AC;&#x2122;Miyah and Maâ&#x20AC;&#x2122;Kiyah, come to Girls Inc. while she works and attends graduate school pursuing a dual degree in Criminal Justice and Social Work.

“I know what education or training I will need for the career I want.”

of the girls say being at Girls Inc. has helped them think about their future.

“I know an adult I can talk to who works in a career that interests me.”

“I will definitely go to graduate school to get a Master’s, Medical Degree, Law Degree, or doctorate.”

EUREKA Externships Eureka! is our five-year STEM (Science, Technology, Engineering & Math) program. The third and fourth years of the program feature summer externships in local businesses where girls have the opportunity to learn valuable workplace skills as well as to earn a stipend. We are grateful to the community partners who agree to host our girls.

of the girls say “There is an adult in my life who believes I will be a success.”

The field is not level. Women are not represented equally in leadership positions. 1 in 4 young women will experience sexual assault before the age of 18. 1 in 5 girls live in poverty. At Girls Inc., girls have the opportunity to speak up, to learn about the difference they can make now and in the future. They learn about the power of the vote and the collective power of advocacy and policy change. In 2018, they marched to reduce gun violence and recruited supporters to sign the national #GirlsToo Pledge to help reduce sexual harassment and violence.

of Girls Inc. girls believe they have a responsibility to improve their community.

Lunch for the Girls Lunch for the Girls was a two-fer this year: Donna Brazille AND (alum!!!) Symone Sanders. These two powerhouse trailblazers told our girls and audience members how and why they should be politically active. They talked, naturally, about leveling the playing field - for women, for folks in poverty, and for people of color.

of girls say at Girls Inc. they learn to make a difference in the world. | 17

of girls say, “I get to try new things at Girls Inc.”

Protégé House One in five of foster youth will become homeless after aging out of the system. In the U.S., as many as 20,000 homeless youth are forced into prostitution by human trafficking networks every year and most of them are girls. Currently under renovation, Protégé House, our transitional housing for up to sixteen young college or workforce-bound young women, will open in spring 2019. Girls and young women who stay with us will be at risk

of homelessness due to family

circumstances, aging out of

violence, trauma, disengagement with education, or mental health issues. The teens have been touring the construction site and give the project an enthusiastic two thumbs up!

Mary S. Landen Scholarship It was a sad day at Girls Inc. when we lost Mary Landen, a fierce cheerleader and community advocate for Team Strong Smart & Bold. Mary served on the Girls Inc. board from 1976 until 1991 and served as its chair in 1983. With her passing, we will miss her presence but her legacy will live on in the college scholarship that was created for the girls in her memory.

The first cohort of the champions for girls! Thank you for joining Champions for Girls, the national Girls Inc. giving society that recognizes you as one of thousands of individual philanthropists from across the U.S. and Canada investing in girls. Your donation was put to work with girls right here in Omaha - but you will also be recognized as part of a national movement that believes girls have rights. Our inaugural Champions know it is the right time to invest in girls. FUTURIST $50,000 or More

Thank you for helping us level the playing field!

of the girls believe it is important to manage money well.

of the girls say they respect the adults at Girls Inc.

We regret any errors or omissions in acknowledging volunteers, supporters and those who paid tribute to others through their donations in 2018.