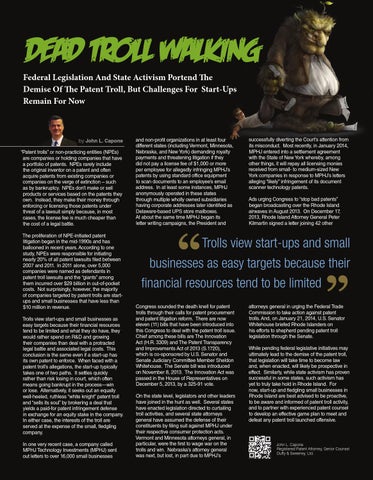 DEAD TROLL WALKING Federal Legislation And State Activism Portend The Demise Of The Patent Troll, But Challenges For Start-Ups Remain For Now

by John L. Capone “Patent trolls” or non-practicing entities (NPEs) are companies or holding companies that have a portfolio of patents. NPEs rarely include the original inventor on a patent and often acquire patents from existing companies or companies on the verge of extinction – such as by bankruptcy. NPEs don’t make or sell products or services based on the patents they own. Instead, they make their money through enforcing or licensing those patents under threat of a lawsuit simply because, in most cases, the license fee is much cheaper than the cost of a legal battle. The proliferation of NPE-initiated patent litigation began in the mid-1990s and has ballooned in recent years. According to one study, NPEs were responsible for initiating nearly 20% of all patent lawsuits filed between 2007 and 2011. In 2011 alone, over 5,000 companies were named as defendants in patent troll lawsuits and the “giants” among them incurred over $29 billion in out-of-pocket costs. Not surprisingly, however, the majority of companies targeted by patent trolls are startups and small businesses that have less than $10 million in revenue. Trolls view start-ups and small businesses as easy targets because their financial resources tend to be limited and what they do have, they would rather spend on R&D and growing their companies than deal with a protracted legal battle and associated legal costs. This conclusion is the same even if a start-up has its own patent to enforce. When faced with a patent troll’s allegations, the start-up typically takes one of two paths. It settles quickly rather than risk losing in court, which often means going bankrupt in the process—win or lose. Alternatively, it seeks out an equally well-heeled, ruthless “white knight” patent troll and “sells its soul” by brokering a deal that yields a paid-for patent infringement defense in exchange for an equity stake in the company. In either case, the interests of the troll are served at the expense of the small, fledgling company. In one very recent case, a company called MPHJ Technology Investments (MPHJ) sent out letters to over 16,000 small businesses

and non-profit organizations in at least four different states (including Vermont, Minnesota, Nebraska, and New York) demanding royalty payments and threatening litigation if they did not pay a license fee of $1,000 or more per employee for allegedly infringing MPHJ’s patents by using standard office equipment to scan documents to an employee’s email address. In at least some instances, MPHJ anonymously operated in these states through multiple wholly owned subsidiaries having corporate addresses later identified as Delaware-based UPS store mailboxes. At about the same time MPHJ began its letter writing campaigns, the President and

successfully diverting the Court’s attention from its misconduct. Most recently, in January 2014, MPHJ entered into a settlement agreement with the State of New York whereby, among other things, it will repay all licensing monies received from small- to medium-sized New York companies in response to MPHJ’s letters alleging “likely” infringement of its document scanner technology patents. Ads urging Congress to “stop bad patents” began broadcasting over the Rhode Island airwaves in August 2013. On December 17, 2013, Rhode Island Attorney General Peter Kilmartin signed a letter joining 42 other

Trolls view start-ups and small businesses as easy targets because their financial resources tend to be limited Congress sounded the death knell for patent trolls through their calls for patent procurement and patent litigation reform. There are now eleven (11) bills that have been introduced into this Congress to deal with the patent troll issue. Chief among these bills are The Innovation Act (H.R. 3309) and The Patent Transparency and Improvements Act of 2013 (S.1720), which is co-sponsored by U.S. Senator and Senate Judiciary Committee Member Sheldon Whitehouse. The Senate bill was introduced on November 8, 2013. The Innovation Act was passed in the House of Representatives on December 5, 2013, by a 325-91 vote. On the state level, legislators and other leaders have joined in the hunt as well. Several states have enacted legislation directed to curtailing troll activities, and several state attorneys general have assumed the defense of their constituents by filing suit against MPHJ under their respective consumer protection acts. Vermont and Minnesota attorneys general, in particular, were the first to wage war on the trolls and win. Nebraska’s attorney general was next, but lost, in part due to MPHJ’s

attorneys general in urging the Federal Trade Commission to take action against patent trolls. And, on January 21, 2014, U.S. Senator Whitehouse briefed Rhode Islanders on his efforts to shepherd pending patent troll legislation through the Senate. While pending federal legislative initiatives may ultimately lead to the demise of the patent troll, that legislation will take time to become law and, when enacted, will likely be prospective in effect. Similarly, while state activism has proven successful in some states, such activism has yet to truly take hold in Rhode Island. For now, start-up and fledgling small businesses in Rhode Island are best advised to be proactive, to be aware and informed of patent troll activity, and to partner with experienced patent counsel to develop an effective game plan to meet and defeat any patent troll launched offensive. 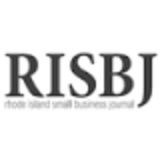