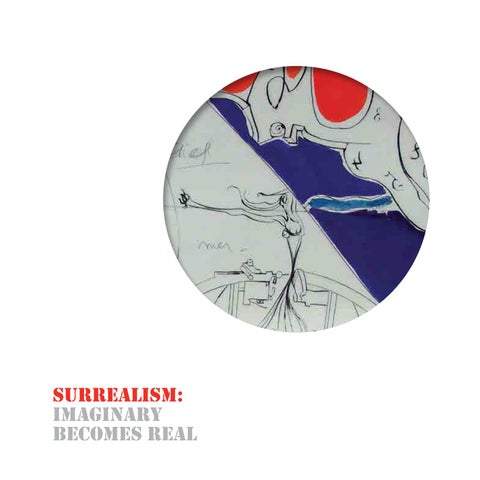 aginary m I B e

The first is the creation of art, or indeed literature, through unlocking the qualities of dream-like imagery that play with concepts of depth, perception and juxtapose objects on various planes. This is referred to as

Oneiric and in broad terms artist’s such as Salvador Dalí, Giorgio de Chirico and Paul Delvaux can be considered as the main proponents of this category. The second is perhaps the most complex and the boundaries of the definition are more fluid as it permits the artist to tap into the unconscious mind in order to simply create through action. This free-flowing spark of creativity is considered to be the most liberating technique, as the artist is not confined to learned arts, nor are they restrained by conventions of style. This category is often known as Automatism and can be seen clearly in the creative processes of Max Ernst, Joan Miró and André Masson.

The uniting factor for each of the Surrealist artist’s is their lack of conformity to a single idea, movement or style. Surrealism effectively embraces, encourages and permits the outsider to flourish.

Surrealism is perhaps the longest lasting artistic movement of the 20th century avantgarde; its methods have been adopted by artists long after its inception in the early 1920s. Unlike many artistic and literary creative movements of the 20th century, Surrealism appears to have neither a firm beginning nor a definitive end. Its principals and methodology, having been adopted by artists of countless countries across western and central Europe, fall into two distinctive categories of expression.

In total, there were three Surrealist manifestos; however only two were ever published and they were all written by André Breton. The first was published in 1924, but by the time the second manifesto was published in 1929 the creative spirit of many of the movement’s most flamboyant contributors was leading them away into the development of new forms of expression; though it is clear the seeds of Surrealism carried through with them. This eventual movement away from Surrealism was

inevitable and a self-fulfilling prophecy as the manifesto believed that there should be no conventional plan which should be adhered to.

Literature – more specifically poetry, has always been an integral component of the Surrealist movement. Artists such as Wassily Kandinsky, Joan Miró and Man Ray would often contribute graphic works to the small print runs of Surrealist poetry; this is particularly notable in the 1939 work Fraternity which contains the poem, Fall of a City, by Stephen Spender and was translated into French by Louis Aragon.

Woman and Bird in Front of the Moon |

and Aquatint on Wove Paper

The primary themes present in Dalí’s work explore religion, time, decay and eroticism. These themes often overlap and are perhaps responsible for Dalí’s work being so distinctive and in turn, easily recognisable throughout his career. The artist’s childhood and the pursuit of memory are the key source of symbolism as it was for many of the Surrealist artists.

Salvador Dalí is perhaps the artist who is most associated with Surrealism and by far can be considered the greatest advocate of the movement throughout his creative life. Dalí moved to Paris with the support of Elena Diaskonova, known as Gala, and the Surrealist poet Paul Éluard in the early 1920s. The period saw the merging of Dadaism and Surrealism, but within a few years and after the inevitable evolution of the group’s ideals, Dalí left in order to focus more purely on Surrealist art.

ctive, bu t it ru st iders to be s

Reverence to the Gooseberry|

Lithograph with Drypoint on Wove Paper

here some w or dp

life an di ound of s or g

pr he ex ession st of i g

Camille bryen Camille Bryen – also known as Camille Briand was close friends with many of the Surrealist poets and was himself a respected poet and painter. His work on the fringes of Surrealism are distinctive from his later pieces, which were to evolve into a movement known as Tachisme.

Hans Bellmer was born in Silesia in modern day Poland, but it was an encounter in Berlin with Georges Grosz and Otto Dix that changed his direction to creative arts. In the late 1930s the artist fled to Paris where he encountered many of the Surrealists and contributed to the movement with his distinctive, eroticised female figures. Originally trained as an industrial draughtsman, it is apt that this drawing is present on technical paper, the fluidity of the lines breaking with the formality of the material.

Drawing on Frontispiece of Book

Madame Rodica Aldoux has confirmed the

This work is recorded in the Archives Descharnes.

authenticity of this work.

This work is recorded in the Victor Brauner Archives.

This work, Composition with Bird and Fish, is comprised of many of Brauner’s signature motifs. Often reminiscent of totemic heads, enlarged creatures and the juxtaposition of motifs that create an overall image. In this instance the positioning of an arm above, the profile of a face in the centre and a fish below creates the illusion of a standing figure. Brauner lost his eye in a bar fight supporting Esteban Francés against Óscar Domínguez in 1938. The artist’s preoccupation with the ‘all seeing eye’ or single eye, was however a motif of expression for the artist before and after this event. Here we see the each element of the composition depicted in profile, with a single eye.

Composition with Bird and Fish, ca. 1948

Victor Brauner was born into a liberal and spiritualist Jewish family in a small Romanian village called Piatra Neamt. After visiting Paris several times in the late 1920s, Brauner finally chose to settle in the city in 1930. It was here that he was introduced to the Surrealists by Yves Tanguy.

Colours are sparsely used to highlight key areas of the composition and the overall image feels very much as if carved onto rock. Brauner amassed a large collection of what was then considered to be primitive or ancient art. There is a sense of wonder created through a link to the fantastical imagery of cave paintings and rock art.

Yves Tanguy is often considered to be the quintessential Surrealist artist and he contributed greatly to the movement, in particular to the representation of dreamlike landscapes. Remarkably the artist was self-taught and the recurring motifs of rocks and landscapes are representative of the reminiscence of childhood experiences. The artist was greatly inspired by Giorgio de Chirico’s work and in turn was an inspiration for Salvador Dalí and Roberto Matta.

Plate II, from: The Tale of the Pierced Stone |

Max Ernst started using the frottage technique in his work in 1925. He regularly shifted the paper while rubbing: “When I intensely stared at the drawing won in this manner, at the ‘dark spots, and others of a delicate, light, semi-darkness,’ I was by the sudden augmentation of my visionary facilities with contrasting and superimposed pictures.” Inspired by the resulting structures, associations were produced that the artist reshaped into new pictorial worlds

This work is recorded in the catalogue raisonné

Lithographs in Colours with Embossing on Arches Paper

Leonor Fini was one of the 20th century’s finest female artists. She worked both in the United States of America and in Europe, partaking in joint exhibitions with artists such as Max Ernst and Giorgio de Chirico. The resilience and strength of the female spirit is the dominant motif in the artist’s work.

The intensity of colour that can in itself breathe life into Chagall’s imagery also enhances the sense of the figure occupying a dreamlike world. This is most apparent in Blue Village from 1974 and the Song of Songs from 1975.

The artist Marc Chagall seems to have eluded the classification of his style into specific artistic movements. However, when his compositions are considered, the juxtaposition of objects, figures, landscapes and the seemingly irreverence for perspective, we can see that the oneiric, ethereal quality of Surrealism is evoked. In the artist’s early works, before Chagall’s attention is firmly focussed on the celebration of colour, we see wonderful compositions of floating figures existing in an unknown plane. This is most evident in the wonderful Man with an Umbrella from 1926/27.

in Colours on Japan Nacré Paper

Hand Signed and Numbered Lithograph in Colours on

Hand Signed and Numbered Etching with Aquatint on BFK

Rives Wove Paper. Based on a painting from the 1950’s titled

“Le Cantique des Cantiques III” now in the collection of the

The imaginative, surreal landscapes that dominate the work of Friedensreich Hundertwasser create an illusionary world where one’s eye jumps from houses to trees to rivers to personifications of mountains – all whilst using bold, vibrant colours. The juxtaposition of bird’s-eye views and varying planes enable the artist to fully express an oneiric world.

with Metallic Embossing on Wove Paper

Etching in Colours with Screenprint on

This work is recorded in the Man Ray works on paper archives.

The Music Lesson or The Sound of the Bell |

The Married Priest or The Hesitation Waltz | Le Prêtre

Les Illuminations is an incomplete suite of poetry by the symbolist 19th Century poet, Arthur Rimbaud. Whilst Rimbaud predated the Surrealism movement, his work is known to have influenced many of the movement supporters. Their admiration being drawn from the fact that the dreamlike and at times hallucinatory poetry focused on the evocative qualities of the written word, much more than simply their literal meaning.

Joan Miró was exposed to the ideas of André Breton’s Surrealism manifesto in the early 1920s, much before it was formalised and published. Miró’s greatest contribution to the artistic language of Surrealism can be his offering of a geo-morphic forms that exist juxtaposed imagery that sprang from his subconscious. This often involved the reduction of one object to its simplest depiction whilst simultaneously elevating and embellishing the next object.

The Smile with Flamboyant Wings |

Hand Signed and Numbered Lithograph in Colours on

on Arches Wove Paper. based on Miró’s oil painting of

The Mauve of the Moon Covers

Delvaux trained initially as an architect and often the most striking feature of his works are the strongly defined spaces created through architecture or on occasions the subtle suggestion of interior and exterior spaces. The artist was well known for the juxtaposition of nude women against classical or natural settings, whilst introducing motifs that seem ill-fitting to any logical narrative. Born in the new age of invention and industrial revolution, Delvaux was particularly fascinated by locomotives and the railways. This motif is seen to be an exploration of childhood memory and the endless possibilities of youth’s imagination.

Paul Delvaux’s work embodies the desire to seize childhood memories and explore the ethereal. A late arrival to the Surrealist movement, the artist became close friends with its founder, André Breton in 1934. It would only be two years before Delvaux’s work was reaching a wider audience through a collaborative exhibition with fellow Surrealist, René Magritte.

This lithograph was created for the inclusion in the deluxe edition of a republished Das Meerwunder [The Sea Monsters] by the Silesian born German author Gerhart Hauptmann. The subject of the siren passed into popular German culture in the 19th century through the stories, poems and classical compositions telling the story of the golden haired Lorelei of the Rhine.

The subject of this lithograph is the Ancient Greek courtesan, Phyrné, at one time the lover of the renowned sculptor, Praxiteles. The ancient subject was popularised again in the 19th Century mostly by French artists. She is shown bare breasted, a reference to her been shown bare breasted to the judges in her trial, who struck by her beauty felt they could not condemn to death “a prophetess and priestess of Aphrodite”.